For those of you guys out there who are clueless and don’t know why your significant other is giving you the cold shoulder, Friday was Valentine’s Day.  Yep, you missed it!  The most romantic day in all of commercialism.\

There is a long, boring, and somewhat uncertain history of how this day came to be celebrated having to do with ancient Romans and fertility and Pope Gelasius adding this day to the Roman Catholic liturgical calendar around 500 A.D.  At least three legends concerning who St. Valentine really was and how he came to be known as the patron saint of lovers exist. Somehow, Chaucer got into the act in the Middle Ages, and then my brain got all muddled from trying to research the origins of Valentine’s Day for this blog, so I gave up.

Besides, who really cares how the whole Valentine’s Day tradition got started as long as you men do what’s expected in order to show your undying love and devotion?  And yes, this is a test, one you’d better not fail.  If one would believe the commercials on television, nothing less than Jared’s (jewelry, clueless guys) will do.  Fortunately, for my hubby, I am a simple woman, who delights in chocolate more than diamonds.  Flowers are nice, but you can’t eat them.  Besides, they always die.  Chocolate stays with you forever (on your hips, stomach, thighs) making more of you for him to love.

I remember in grade school we traded valentines with all the other kids in our class.  Now maybe it’s just me, but I kind of thought your valentine was supposed to be an exclusive.  I never really understood how you could be valentines with everyone in the class, including the teacher and the kids you didn’t like.  But I guess the card companies make more money with packages of 20 valentines (because you are forced to give one to everybody), especially if you have to buy a second box because there are 22 kids in your class.  Somehow, the card companies always made it so there were never quite enough cards in one box.  (Still do.) But even as a child I didn’t see the point of Valentine’s Day, other than my dad always bought my mom a heart-shaped box of chocolates, which she graciously shared.  I mean didn’t he love her any other day of the year?

Anyway, Valentine’s Day seems to have evolved into a much bigger deal as we’ve gotten older. The stakes keep getting higher (just ask Jared’s) and there is more expectation than just a mushy card with red hearts on it.  Hallmark does pretty well with the cards, but they up the ante by running chick flicks all month to put unrealistic ideas into the heads of romantically-inclined females.  (Still anything is better than the Christmas movies which have been playing since July.)  But no wonder this is a day most men dread.

Now I have good news and bad news for you guys. The good news is since Valentine’s Day is over, you can get a good deal on chocolates.  They’re all on sale now.  And if your sweetheart is frugal, she will appreciate the fact you are able to buy her twice as much chocolate than you would have if you’d remembered Valentine’s Day in the first place.  That’s probably also true with balloons and flowers (assuming they’re not wilted). If you’re really savvy, snatch up a card at half price and save it until next year. Just remember where you put it. The bad news is that although we don’t know for sure who the real St. Valentine was (there were at least three different saints named Valentine), all of them died a martyr’s death.  And if you don’t want to be included with them, you’d better darn well remember Valentine’s Day next year! 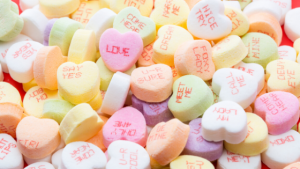