Ride, Sally, Ride On Out of Here!

My husband recently received a Facebook posting that read, “If there is not a tropical storm in your area, stand by and one will be assigned to you.” Boy, isn’t that the truth! As I write this, Hurricane Sally is meandering her way toward the Gulf Coast, inch by inch, changing direction every hour. And as if that isn’t bad enough, we have Paulette, Teddy, and Vicky on her heels. Oh, and there is also Disturbance 1, a broad area of low pressure over the southwestern Gulf of Mexico, Disturbance 2, a few hundred miles southeast of the Cabo Verde Islands, and Disturbance 3, a non-tropical area of low pressure several hundred miles north east of the Azores. What, did we run out of alphabet and have to assign storms the nomenclature of “Disturbance” and a number? According to my calculations we still have W, X, Y, and Z left. By the way, what happened to U? Did I miss something?

Just when it seems we might be getting back to some semblance of normal—whatever that is—along comes a hurricane to shut the schools down again. We got the delightful message that Younger Son would be having class electronically today, at home. Oh goody! Yet again, we are stuck in the house with him, unable to make noise or conduct any other household duty, due to his online classes. I do believe I have expressed the sentiment that if we wanted him to be schooling at home, we wouldn’t be forking out big bucks for Rocky Bayou to deal with him every day. All this over a little rain! Geesh! Younger Son won’t melt; he’s not that sweet! However, on second thought, he does have a lot in common with the Wicked Witch of the West, so perhaps he could be in some peril from precipitous (pun intended) weather. And that would be a bad thing, because? Don’t get me wrong, but there are days when the prospect of Younger Son melting away into a soggy puddle look pretty good.

It isn’t that I don’t take hurricanes seriously. I do. I’ve lived here for forty years now and I’ve seen first-hand what hurricanes are capable of. But with all the hype build-up for days preceding the disaster, I have to admit I’ve become somewhat complacent. Sometimes I wished I lived in an earthquake zone instead of a hurricane zone where the event just “happened” without having the 3-4 days prior to work people into a state of panic.

We evacuated for Opal in ’95. We ended up in bumper to bumper traffic on I-10 and there we sat when Opal hit. For nine hours on I-10. With the rest areas closed, no less! We finally arrived in Valdosta, Georgia, at Moody Air Base in the wee hours of the morning, where we spent the night in the officer’s club on army cots with about two hundred other people. At least the rest of the family did. I spent the night in the bar (closed, lest you get the wrong impression) with our 17-month-old son who had blissfully slept through the long trip and was now wide awake and raring to go. To add insult to injury, it was my husband’s and my 5th wedding anniversary. It took two days before we were able to get back home, as residents were not allowed back into the area. At that point, we vowed never again to evacuate. We live on high ground in a cinderblock house, so unless someone mysteriously starts building an ark, we’re staying put.

When Ivan hit in 2004, we were lying in bed listening to the storm. Suddenly there was a loud crash just above our heads. A couple of minutes later, I looked out our window and saw the corner of our roof go sliding past. “Uh-oh,” I said to my husband. “That’s probably not a good thing.” Turns out I was right. A minute or two later, water began gushing into our bedroom. Fortunately, because we hadn’t evacuated, we managed to move our bed, dresser, and bookcase out of the line of fire, or rather water. We spent the rest of the night bailing water with trash cans. But we had wanted to do some home renovations anyway, so this gave us the excuse to actually get started.

I realize that my complacency will probably catch up with me one day. However, until then, I will maintain my sanity, weather the storms, and deal with whatever comes, including Younger Son doing school remotely. And who knows, maybe the hurricanes will blow Covid-19 out to sea. 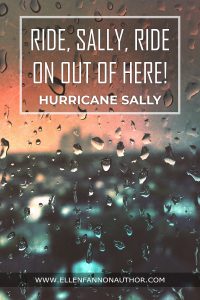