Water, Water Everywhere, But Can You Drink It? 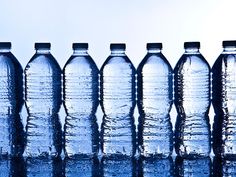 When bottled water first became popular in the US in the late seventies, I couldn’t help wondering who in their right mind would buy bottled water when one could simply walk to the faucet, turn it on, and get water for free. Of course bottled water has been around a lot longer than my lifetime, going back to 1767 in Boston, where a company called Jackson’s Spa sold the first commercially obtainable bottled water. In Europe the history of bottled water goes back even further. Still, although it may have been around, I don’t remember seeing bottled water readily available before the late seventies or possibly later. And although I just couldn’t believe people would pay good money for something they could get from the kitchen sink, I finally succumbed to the trend and started carrying bottled water to work. However, I usually refill the empty bottle from the sink and reuse it several times. (Please don’t enlighten me on all the impurities and chemicals I’m ingesting from tap water.)

Now the pendulum has swung in the opposite direction because the plastic bottles are bad for the environment, so the “green” folks are now using refillable metal or plastic containers (which I thought all along made more sense). I suppose I’m way ahead of my time. I’m not sure where the refilled water is coming from, but that’s speculation for another day.

In some parts of the world, bottled water is a necessity because you can’t drink the water. When we lived in Indonesia, we had a dispenser with a five-gallon water jug that we had to keep replenishing. We even had small water containers in the bathroom for brushing our teeth. Periodically, Older Son, who was five years old would get careless and then we all suffered the consequences of his gastrointestinal afflictions. Public drinking water was a rarity in that country, but once, when we were at a park, I spotted a park employee refilling the drinking water jug from a hose. That taught me never to trust the water source unless I knew for sure where it had come from. In some countries the standards of sanitation and health are not what we are used to here.

When we returned to the states, I almost kissed the first public drinking fountain I ran across. It was the first time in two years I had seen one. Even better, I knew it was safe to drink the water. Still, I maintain a case of bottled water in my house, and not just for hurricane season.

Recently, I have been seeing an ad on TV for a particular brand of bottled water. The commercial starts out with a pristine snow-covered mountain top from which the melted snow cascades into a sparkling, clear lake several hundred feet below. From what I gather, the gist of the commercial is to display how pure and natural the lake water is. Then, out of the lake, a girl pops up, and all I can think is EEWWW! I don’t want to drink water that someone has been swimming in. Goodness knows how many dead skin cells she has sloughed off, not to mention hair. Has she slobbered into the lake? Or worse? That commercial has completely turned me off for that brand of bottled water. I think I’ll stick to my kitchen sink. 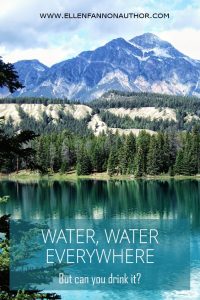