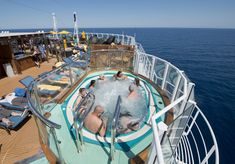 We miss our cruise. No, not in the sense that we didn’t make the boat. We mean that it’s been two weeks since we got back. Our bodies may be in Valparaiso, but our hearts and minds are still aboard the Holland America cruise ship in the middle of the blue Caribbean waters under eighty-degree sunshine. Our fantasy of deciding whether to have the prime rib or the filet mignon for dinner has become the reality of Hamburger Helper or beanie-weenies.

Believe it or not, there are actually people who simply “cruise through life.” They either stay aboard at the end of one cruise, or ship hop from one cruise line to another. I sat in the hot tub eavesdropping on numerous conversations, many of which revolved around topics such as, “This is our fourth cruise this year, and so far, the Celebrity Cruise was the best,” or “We’re taking the Greek Islands cruise in March, the Hawaiian cruise in April, and the Alaskan cruise in June. I kind of wanted to ask what was happening in May, but kept quiet, as I already felt like the poor relation from the wrong side of the tracks. After all, this was only our first cruise this year, and we were going home at the end of it. In fact, this was actually our first cruise since 2018. I didn’t want that embarrassing fact to become public knowledge. Here I thought we were doing well to be able to take one cruise every few years. Little did I know. And I didn’t want to be asked to vacate the hot tub due to my unworthiness to be there.

In Barbados, we intersected with a Viking cruise ship, and while waiting for our off-shore excursion, I asked one of the passengers how she liked Viking. She raved on and on, saying she had cruised one-hundred days with Holland America and it couldn’t compare with Viking. So now, not only did I feel like the poor relation whose days at seas numbered quite a bit less than in the triple digits, I also apparently was on an inferior ship. With all the opulence, amenities, and passenger-pampering on Holland America, I could hardly imagine how that could be, but the Viking passenger seemed quite the expert, so who was I to argue?

As wonderful as it might seem to simply spend my golden years at sea, I can see some drawbacks. For example, if you are cruising repeatedly on the same ship, eventually you will know all the answers to the Trivia contest questions. As it was, Hubby and I won the Trivia competition three times. I have always thought we were trivial people. For our brilliant victory, we received a Holland American pin—for the European cruise because they were out of the pins for the Caribbean. So now we have six pins to add to the ones from previous cruises, which we probably can’t find. As it was, I suspected there were people playing Trivia who had heard all the questions and were cheating. Otherwise, how would they know that a group of Iguanas is called a “mess?” Who knows that stuff, anyway? It was bad enough having to compete against the drunks at the bar who couldn’t resist yelling the answers out loud. But to think there were people among us who knew the answers because of months of cruising was . . . well, just unthinkable.

Another drawback is I couldn’t stand to see the staff constantly cleaning up after the guests. Nice as it was, it would only be a matter of time before I was clearing away everyone’s dirty dishes and towels. I can’t help it—I’ve lived with three men for most of my adult life. Next thing you know, I would be down in the laundry area or the kitchen, where I spend most of my at-home hours.

So, I guess it’s best we are back to our “normal” lives—working, running errands, housework, yardwork, trying to take care of everyone else’s needs, whipping up Hamburger Helper for dinner, and cleaning up after all the pets. But that doesn’t stop me from dreaming about my next cruise, no matter how far in the future that might be. Maybe next time we’ll try Viking and wear our Holland America pins. Von voyage. 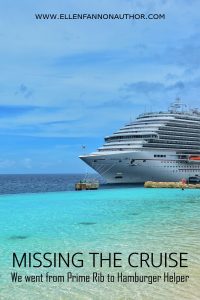