I love the Pluggers cartoons. Pluggers is aimed at the Baby Boomer and the GI generations who grew up during an era in which common sense prevailed and technology was absent. The pluggers featured in the cartoons are usually in the form of anthropomorphic animals. I often find myself identifying with the “pluggerisms” that are sent in by readers, as I am the typical older person who sometimes longs for the simpler days gone by. Sometimes I feel more and more that I am being left in the dust. But today’s comic really wasn’t just limited to pluggers. It showed a bear eating a pizza and drinking a “zero” soda. The caption read, “A plugger knows a diet soda makes any meal low-cal.”

I have always known that chocolate was a health food long before it ever became popular as such. After all, it comes from a bean, and beans are vegetables. Here are a few other diet axioms that I have come to adopt:

There you have it. Feel free to use any of these sayings to justify whatever eating habits you like. You’re welcome. 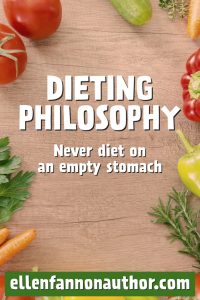