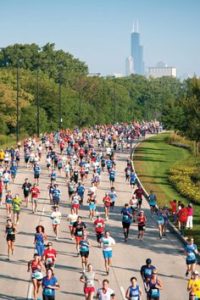 On our way to Fort Walton last Saturday, we spied numerous people jogging along the side of 85 spread out all the way from Valparaiso to Racetrack Road.

“Must be a marathon,” he replied.

Sure enough, as we went on, we saw several stations with people set up with tables and coolers—I’m presuming to offer water to the runners, rather than to be spectators.

“Who in their right mind would run a marathon?” I asked. “How could anyone consider that fun?”

“The only way I would participate in a marathon is to sit at a water station and cheer on the runners,” I said. “I could be a good cheerleader, encouraging people with ‘keep going, you can do it,’ while eating my Big Mac and fries, as I catch up on Facebook.”

“That was back in the day. Back in the day, I could do a lot of things. But running for fun wasn’t one of them. In fact, it never crossed my radar.”

As we passed the Armament Museum, I noticed an ambulance and several EMT’s standing around, just waiting for one of the health nuts to keel over with a massive coronary. Of course, it would be convenient if the runner managed to make it to the museum prior to keeling over, since that’s where all the emergency personnel were stationed. Otherwise, they might have to lie on the side of the road until someone managed to notice them. Or tripped over them, causing more injuries.

And that, among other reasons, is why I don’t run marathons. Any activity in which you have to have emergency services standing by can’t possibly be good for you. Have you ever seen emergency personal standing by at McDonald’s? I rest my case. 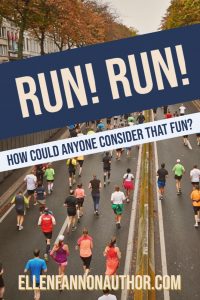