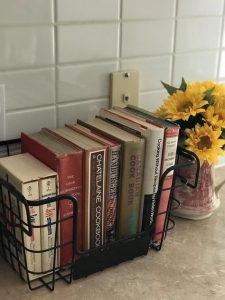 As I mentioned last week, I have been slowly trying to clean out clutter, which will probably take me the rest of my life. While working toward this end last week, I came across a ton of cookbooks. This is surprising because I am not much of a cook. When I do cook, I generally use the TLAR method (that looks about right) rather than actually follow a recipe. I don’t even know where most of these cookbooks came from, so it shocked me when I kept unearthing more and more. Was somebody trying to tell me something? About the only one I ever use is a tattered paperback cookbook that is missing several of the last pages, so I don’t have an index. I only consult that cookbook to make sugar cookies at Christmas and cobblers. That’s it. I have the handful of recipes I occasionally use on index cards in a plastic bag with several other recipes people have given me over the years that I’ve never tried. I even found a cookbook in Portuguese that someone gave me when I spent six weeks in Brazil on a professional group-study exchange program over thirty years ago. It’s not like I can even read it.

Now came the chore of trying to figure out which ones to keep and which ones to get rid of. Well, I obviously have to keep the one my mother-in-law put together for Fannon’s Fabulous Famous Foods over twenty-five years ago which I have never used. And I have to keep the several cookbooks put together by various churches—also rarely used. Plus the cookbook compiled by my mother (who died almost forty years ago) in which there are pockets stuffed with clippings from newspapers. I’m almost afraid to touch the clippings lest they disintegrate. Should I mention that although there are several of her recipes I’ve been “meaning to try,” I have yet to make use of that cookbook, either?

There are cookbooks for my microwave and my slow cooker which I have never consulted. I even found a booklet that came with my brownie pan. The problem is I have to sit down and thumb through these books to see if I might “someday” want to try out these new and different recipes (which my family invariably won’t like), or just admit I probably will never use them and move on.

Did I mention one of the downsides to retirement is now I am almost always home first at night, which means I have to cook dinner? Before, the rule was whoever got home first cooked. That meant Hubby had kitchen duty at least half the time. Granted, we ate a lot of spaghetti and Hamburger Helper, but as long as he was willing to cook, I never complained. Now I have to come up with imaginative meals almost every day. Since I am home and “have the time,” I feel guilty if I pop in a microwave dinner. There seems to be a bit of the 50’s housewife ingrained in my psyche. Not that Hubby would ever complain, bless him. He knows better. If he utters one word about my cooking, the chore will fall back to him.

There is a solution to my dinner dilemma, however. It’s called “restaurants.” In fact, I have a sign hanging in my kitchen that reads, “If God had intended me to cook, then why did He invent restaurants?” Works for me. On further thought, I probably don’t need any of those dozens of cookbooks. 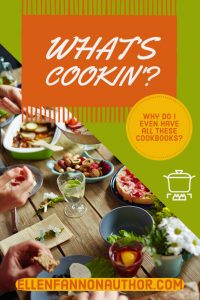