“Hey, what’re you making?”  My older son had wandered into the kitchen as I was browning some breaded chicken for dinner.

“Chicken with bread crumbs and Parmesan cheese, which I will then cover with cream of chicken soup and bake in the oven.”

He surveyed the sizzling frying pan.  “It would taste better if you added some tarragon.  Do you have any tarragon?”

Tarragon?  What the heck is tarragon?

“Too bad.  Pick some up the next time you go to the store.  How about paprika?  You have any of that?”

“Sorry, no paprika, either.”

He picked up a bottle of garlic powder and liberally sprinkled it into my pan.  “Well, at least the garlic will make it better.”

Let me explain.  My son has spent the last few years as a cook in several various types of restaurants. As a result, he has become quite the “foodie.”  He has developed a gourmet palate and can wax theatrical on textures, subtle blends and nuances, and other masticatory adjectives describing food.  Me, I describe food in one of two ways—tastes good or doesn’t taste good.

I am a simple person who cooks simple food, and that is mostly out of necessity to keep from starving or going broke eating out.  Breaded chicken baked with cream of chicken soup is about as gourmet as I get.  Beanie/weenies is more my style.  As for spices, I may own three. (Do salt and pepper count as spices?)

It’s sad, really, as my mother was a good cook.  She just didn’t pass that gene onto me. But back then women had to know how to cook, as nuking frozen stuff into the microwave was not an option.  I won’t even discuss my mother-in-law, who not only made everything from scratch and was voted “Columbus, Ohio, Homemaker of the Year” in nineteen-sixty-something, but also ran a business, raised five perfect children, taught Sunday school, and received the Nobel Peace Prize for curing cancer.  (Okay, maybe I exaggerated a little on that last point.)

But the fact is my culinary talents are sorely lacking.  And it’s rather embarrassing that my son is a better cook than I am.  After all, aren’t sons supposed to sing their mother’s cooking prowess when a girlfriend or young wife cooks them something completely inedible?  Somehow, I can’t ever see that happening with my sons.

One would think that having a gourmet chef living in the house would score us some fantastic meals.  Unfortunately, it seems Older Son is always “out” when there is cooking to be done.  So my poor husband and I end up coming home after work and throwing something into the microwave.

Older Son did, however, put together a tasty pork stew a few weeks before Christmas. As we sat around the dinner table enjoying the rarity of having someone else cook dinner, my husband spooned a strange looking object from his bowl.  “What’s this thing?”

“Well what’s it doing in my stew if I’m not supposed to eat it?”

“It’s in there for flavor.”

Thank goodness my husband got the bay leaf instead of me.  I would have just eaten it, assuming it was some epicurean delicacy which was supposed to be good for me.  Don’t eat the bay leaves.  Who knew? 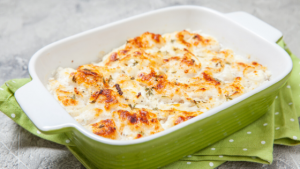