EAT WELL OR BE HAPPY

Okay, I want to know who put my name on the Nutrition Action Health Letter listing. My invitation to subscribe to this newsletter came in today’s mail.  Addressed to me. Was it someone who caught me eating chocolate cherry cheesecake and telling people I had met my nutritional requirements for the day?  (Cheese is protein/dairy, cherries are fruit, and chocolate is a vegetable—it comes from a bean.)

The letter starts out, “Dear Friend, you’ve always wanted life-saving information about the foods you eat.”  Huh?  No I don’t.  When it comes to my junk food, I’ve always said ignorance is bliss.  Girl scout cookies were forever ruined for me when they started listing the nutritional information on the boxes.  Up until then, I figured a sleeve of thin mints was probably around 30 calories.  Totally acceptable, right?

The next sentence is, “You should know, for example, that Olive Garden’s ‘Tour of Italy’ is among the unhealthiest restaurant entrees.”  Oh, come on!  How can anything so delicious be unhealthy?  Doesn’t tomato sauce count for a vegetable?  Does it help if I counteract the “Tour of Italy” with two helpings of Olive Garden salad?  I thought the Italians were robust, hearty people.  After all, look how long they’ve been around.

It goes on, “You know you should eat lots of fruit—but which are the most nutritious? (Guava, watermelon, kiwi, papaya).”  Sure, none of which I like.  “And which are among those most likely to be contaminated with pesticides? (Strawberries, peaches, apples, blueberries.)”  Great, all of which I do like.

“It’s time you knew exactly what’s in your food.”  Why?  Didn’t I just say ignorance is bliss? I don’t want to know what’s in my food. If I consciously thought of my hamburger as a cow, I could never eat it.  “I get so frustrated scanning a restaurant menu, trying to find a dish that’s tasty and healthful.”  Not me.  I just get frustrated trying to find a dish that’s within my budget.  You know, I really want the prime rib, but can only afford the chopped steak.

Then it goes on to criticize sugar.  Again, a vegetable, right?  Isn’t sugar cane a plant? The newsletter even pans McDonald’s chocolate milkshake, for crying out loud.  I’ll admit I’m not a huge fan of McDonald’s, but when it comes to their chocolate milkshakes . . . can I just say HEAVEN?  There is a list of superstar foods, most of which I don’t like.  Sweet potatoes are good, provided you slather them with butter and cinnamon.  Plain Greek yogurt—uh, no.  Give me the yogurts with fruit (and preferably added sugar). Broccoli is acceptable provided it’s swimming in cheese sauce. The rest of the foods I would never eat as they are yukky.

There are testimonials from Mary and Jeff in California, and Sharon, also in California.  Hmm.  Do I see a trend here?  But sure, who wouldn’t jump on the bandwagon if Mary, Jeff and Sharon say so?

Several reasons are listed as to why I should get this newsletter.  The first is to be healthier.  Okay, I will grudgingly give them that.  The second is to be happier.  But if I can’t have McDonald’s chocolate milkshakes, I highly doubt I will be happier.  The third is to eat tastier meals.  Yeah, not falling for that one. I’ve tried those healthy soups that taste like dishwater and salads that look like I should have just wandered out to my backyard and grazed on the weeds like a goat.

The last is to live longer. Sorry, but if I have to spend all my life eating “healthy,” why would I want to live longer? Geesh.  Next they’ll want me to exercise! 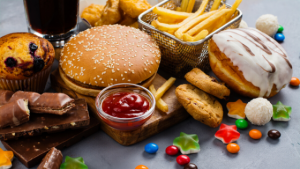