Who was that masked man anyway?

Who was that masked man anyway?  This saying has taken on a whole new meaning since the days of the Lone Ranger.  Now we can add “or woman” to the question.  Since many of us have resorted to wearing masks in public, it is sometimes difficult to recognize people.

Why did the Lone Ranger wear a mask in the first place?  He wore it to hide his identity. The story goes that the Lone Ranger at one time was part of the Texas Rangers and was the only survivor in a group of Rangers who were killed in an ambush.  For some reason—I’m not really sure why since I never watched the show—he was still forced to conceal his identity as he fought for law and order in the old west.  Maybe the bad guys were still out to get him.  As if they couldn’t readily identify him with the rest of his face exposed.

I mean, seriously, if I could see that much of people’s faces today, I would have no problem in telling who they were.  But with this Covid-19 forcing us to cover the lower half of our facial features, I sometimes struggle.  There are other disadvantages, as well, such as not being able to tell if people are smiling or snarling at me.  On the other hand, they can’t tell the same thing about me and I can even stick my tongue out at them without them being aware.  Not that I would ever do that. But as long as I’m careful about not letting my facial expressions reach my eyes, I can act out a lot of emotions behind that mask that I couldn’t do without it.  But with my mask in place, I can’t receive a thoroughly satisfying face-washing from a happy canine patient; nor can I remove the cap from a needle with my teeth, which is a bad habit I should have broken a long time ago, but haven’t.

But while I’m on the subject of wearing masks for public safety, let me just say I don’t understand the mentality of people who wear their masks below their noses.  If I can see your nostrils, the mask isn’t serving its intended purpose.  Or the people who wear their masks pulled down around their chins.  What it is there for, anyway? So they can yank it up if someone calls them out on it?  And I really don’t get the point of wearing a mask if the wearer pulls it down to talk to me.  Let me assure you, lips move perfectly well beneath a mask and I can hear through the barrier, though lip reading is a bit challenging.

There are people who say they can’t breathe in a mask.  Maybe that’s because they’re too full of hot air. Surgical personnel have been wearing masks since the 19th century and I’ve never heard of doctors or nurses keeling over in the surgery room due to lack of oxygen or a build-up of carbon dioxide from wearing facial masks.  After all, we want our operating room team to have well oxygenated brains. They can even talk with their masks on. At least they do on TV. On medical shows, most of the social networking takes place in the operating room, which makes me somewhat leery of having surgery where the doctors and nurses are more focused on their personal lives than my operation.  But that’s fodder for a different blog.

So for now, if I don’t recognize you in public, please don’t be offended. Chances are, with my terrible memory, I wouldn’t recognize you without the mask, either, but at least this way I can pretend it’s the mask rather than my faulty memory.  And please, for everybody’s sake, cover those nostrils!  Believe me, we’ll all breathe easier. 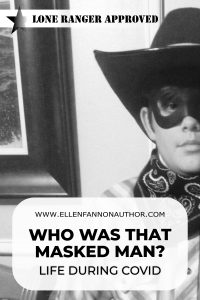