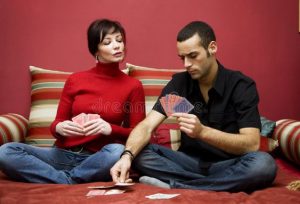 My husband and I are quite competitive. Each morning we read the Trivia questions in the paper and see who got the most questions right. Then the winner gloats. If, for some reason, my husband reads the paper before I do, he actually writes down how many questions he got right. Then, later that day, he will ask me how many I got right. Generally, I tell the truth, even if I didn’t get as many right as he did and have a clear-cut opportunity to pretend I did. Our competitiveness doesn’t just extend to Trivia, however.

He won’t play Scrabble with me anymore because I always win. (I could also read the entire novel, War and Peace, while waiting for him to take his turn, as he painstakingly spends an eternity moving his tiles around to come up with the highest scoring word.) In fact, I have been known to multitask when playing this game with him. We tend to come out about equal on card games like Rummy or Uno, but that isn’t surprising given the fact those games are more about luck than strategy. Trivial Pursuit often leans more in his favor because he knows the answers to all those obscure history and geography questions. It wouldn’t be so bad if he didn’t feel the need to pontificate over every question. We tried playing Monopoly—once—but he makes his own little, dirty, side deals with other players, such as allowing them a free pass on his properties if they allow him a free pass on theirs, while showing no mercy to other players, such as his wife. He is equally merciless when playing Sorry, never giving anyone, including small children, a break. Don’t even get me started on miniature golf. He meticulously counts each and every stroke and revels in his opponent’s misfortunes. If I add the score at the end of the game and for some reason, he has more strokes than I do, he insists on checking the math, himself.

It is probably good that our career paths and a lot of our outside interests are divergent. I never tried to tell him how to fly airplanes, and I certainly don’t attempt to try to preach better than he does. Likewise, he doesn’t try to outdo me in practicing veterinary medicine. I can’t imagine working with him and having to add up how many rabies vaccines each of us administered at the end of every day. It’s just as well we don’t have to compete in these arenas of our lives.

Recently, in the Trivia section of the newspaper, there was a question which asked, “Which sense is less sharp after one eats too much?” The answers from which to choose included: hearing, smelling, sight, and taste. The answer, strangely enough, is hearing—which I got right, by the way, and he missed. This explains a lot. I have complained for a long time that my husband doesn’t hear me and have nagged him repeatedly to have his hearing checked. Of course, with his competitive nature, he will not admit that my hearing is better than his. Now I know it’s not a matter of who has the better hearing. He just overeats. 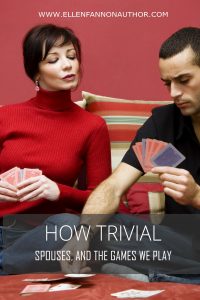