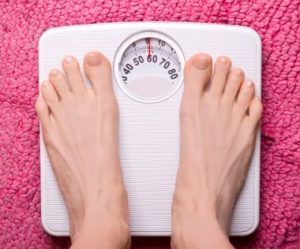 Every morning, he would stand on it, then repeatedly jump up and down and vary his stance, trying to get the dial to change. He swore it did, though I never saw evidence of this. Finally, I had enough, and bought him a new digital scale for Christmas one year, thinking this would stop that little annoying ritual. Nope. Now he has a new ritual. First, he weighs himself. Then he strips down to his birthday suit and repeats the process. Then he repeats this step a few times.

“Are you trying to get a second opinion?” I finally asked him this morning, after the third weigh-in.

“I’m just seeing how much I weigh without my gym shorts,” he replied, testily.

“Oh, I’d say just subtract a good ten pounds for the shorts,” I offered, helpfully. Still, I didn’t understand the necessity of repeatedly weighing himself in the buff. But if it makes him happy, so be it. He could have worse habits.

Now I generally don’t weigh myself all that often. So, I was unpleasantly surprised when I hopped on the scale recently to discover I had gained six pounds. To make matters worse, at my doctor’s office, the scale said I had gained twelve pounds! (They didn’t even subtract ten pounds for my clothes.) This is aggravating enough, in and of itself, but for the past six months, my husband and I have been making a concentrated effort to get healthier. To that end, we drag ourselves out of our warm bed while it is still dark outside, and walk a brisk two miles each morning—even when it’s thirty degrees outside. At least each morning that we’re working. On my days off, there’s no way. A day off is a day off, after all. But the last thing I expected after this disciplined torture was to find I had GAINED WEIGHT. Yeah, yeah, I know. Muscle weighs more than fat, or so they say—whoever THEY are. It sounds good, and that’s what I keep telling myself. Still, it’s a bit discouraging, and I’m tempted to give up exercising so I can lose the weight again. Not only that, but my thighs are still as flabby as ever.

My father-in-law was one of those men who was built like a beanpole and ate like a horse. He was forever complaining to anyone within ear shot that he couldn’t gain weight. I don’t know how many times we told him that nobody sympathized with him, so be quiet, already, before someone smacked him. I know that as we age, we tend to become our parents. But somehow, I doubt my husband will ever take after his father in weighty issues. 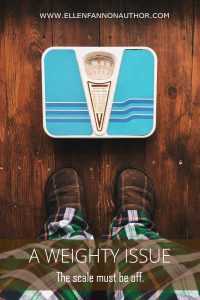