A recent Zits cartoon once again made me wonder if someone has a hidden camera in our home:

Teenager’s mother: Jeremy, you know your Spanish teacher? It turns out that she’s an old friend of mine. We’re going to have lunch! Isn’t that exciting?

Teenager Jeremy: Mom! You can’t have lunch with my Spanish teacher!

Mother: Of course I can. She’s an old friend.

Teenager: Well, at least promise that you won’t talk about me!

Teenager: Oh, so now I’m not interesting enough to discuss?

Our son has gone from an adorable toddler running across the room to greet us, a huge smile on his face, to a brooding teenager who wishes we would somehow disappear from the planet and leave our checkbook behind. Never in the course of history have two people been such an embarrassment to a child. He is mortified if we wave at anyone while in the car, particularly if it is in his school’s parking lot. If we should actually roll the window down to speak with someone, he has a meltdown.

So, what are we supposed to do? Turn our heads and stick our noses in the air? Perhaps say, “Sorry, Darion doesn’t want us to speak to you,” and drive off?

And, of course, if he discovers we are meeting with an adult from his school for a reason that doesn’t have anything to do with him, he instructs us, “Don’t talk about me.”

Occasionally we remind him that there are other topics to talk about besides him. I know he doesn’t believe that revelation as the whole world revolves around him, but it is true. Since my husband is a pastor and our son attends a Christian school, my husband has a lot of other interactions with the faculty that (shocker) don’t have anything to do with our son.

But the ultimate humiliation is when my clueless husband has the audacity to drive our son to school or pick him up while driving his sportscar. Never mind the fact that other students, as well as adults, comment with, “Cool car!” It seems everyone but our son thinks the car is pretty neat. At least we have never yet heard anyone say, “Poor Darion, having to ride in a vintage sportscar! Someone needs to report those parents to Child Protective Services.”

Yes, I freely admit we do our best to embarrass our teenager. But it really isn’t all that difficult. All we need to do is breathe. 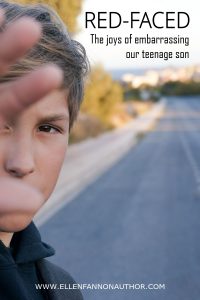