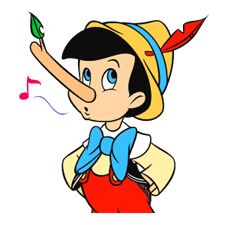 Okay, all you parents out there. How many of you have ever told your child(ren) a lie? Especially after telling your children not to lie. Well, I imagine, unless you’re lying, we all have. But in our own defense, as parents, we have darned good reasons, and in most cases, they are more than justifiable.

For example, I have repeatedly told my kids the pictures they drew were good. In a weird, abstract, untalented, “what the heck is this supposed to be a picture of,” type of way. Like most parents, I have posted said works of art on the refrigerator. The problem comes when one of the kids finds a treasured masterpiece in the trash. Then I have to do a lot of back-pedaling as I rescue the “accidentally-discarded” item and carefully restore it to its rightful place of prominence on the refrigerator. “I don’t know how that got in there! Of course I didn’t mean to throw it away!” But in all honesty, since we’re talking about lying, what parent can bear to tell their budding artist he ain’t no Rembrandt? I won’t even go into musical talent.

For a long time, we got away with telling Younger Son there was a problem with the cable TV company—especially when we flipped the circuit breaker to the TV when we went to bed so he didn’t get up and watch TV in the middle of the night. When he caught on to that trick, we had to disconnect the cable. But eventually, he caught onto that, too. I hate it when the kids get more tech savvy than the parents! It makes lying so much more difficult.

When Older Son was little, we got tired of him begging to take pictures with our expensive camera, so we gave him his own camera—one that we no longer used. He happily went along his merry way snapping pictures of everything. We never told him there was no film in the camera, so technically, we didn’t lie. He never asked about film. Nor did he ever ask about having his photos developed. (Yeah, I know, this was quite a while back, before digital.)

One of my favorite exaggerations (not lie, really) was when the kids were little and we took them to the zoo, I told them you could tell male zebras from females because the male zebras’ stripes were black-white-black-white, while the females’ stripes were white-black-white-black. They were absolutely amazed by this incredible piece of knowledge. It took them a long time to realize this was not technically accurate. But after all, who were they to question their mother, the veterinarian?

Check out the following list of common lies parents tell their kids and see how many you’ve told:

And finally, three of my personal favorites: 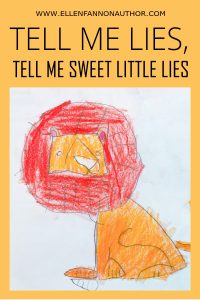