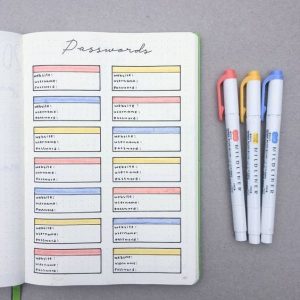 I remember when I was a child, back in the day of black and white television (yes, we did have television when I was a child), there used to be a gameshow called Password. In this game, two contestants, each paired with a celebrity teammate, tried to guess a word (the password) using single-word clues. Since then, the word “password” has come to have a completely different meaning.

Nowadays, you can’t do anything without the proper password. You need a password to log in to social media, all online accounts, patient portals, and work stations. I personally have 973 (give or take) different passwords, one for every transaction I have ever made. The problem comes with trying to remember those passwords. For a long time, I used the same four-digit number, even though I received repeated warnings that using the same password for everything was inadvisable. But at least I could remember it! Plus, I figured if someone really wanted to hack into my Verizon account badly enough and pay my bill online for me, they were more than welcome to do so. Then passwords became more sophisticated, and I had to graduate to a six-digit number. Then that number became inadmissible for many websites. What really bugs me is when I try to establish an account and I put in my six-digit number only to have a red admonishment pop up saying, “your password needs to be at least eight characters long.” Well, why didn’t they tell me that in the first place before I wasted my time?

I really love the sites which suggest using a “strong” password, such as 96%*hP(mG^7DRwB%qA!. Sure, that’s a password I’m likely to remember. I’ll only use that suggestion if I never want access to my account again. Nope, I’ll take my chances on my familiar six digits. When I worked at the base veterinary clinic, we were required to change our passwords every three months. Did they not realize it took me three months just to memorize my old password? The only way I could remember a new password was to place a sticky note with the password on my computer, which kind of defeated the whole purpose of the password. Not only did we have to change our passwords every three months, but the password had to have at least one upper case letter, one lower case letter, a number, a special character, and be at least one hundred characters long. (Okay, maybe I exaggerated a little on that last point.) But all those requirements really overload my limited brain bytes and fill my head with unnecessary clutter.

Sometimes my husband will establish an account for me, which is okay until I need to access that account and have no idea what password he used. For some reason, he generally uses something meaningful to him, but for which I would have no clue, such as a helicopter he flew in the 70’s. He did this to my “View My Paycheck” account at work. For months I had to take his word for it that I’d been paid. Finally, I broke down and asked him what the blasted password was, after unsuccessfully trying numerous combinations of the more common passwords we use. He informed me it was a password relating to an old sportscar he used to own. Oh sure! I should have figured that one out! Why, of all the shared, meaningful passwords he could have chosen, did he pick one that had absolutely nothing to do with me on my paycheck account?

Now in my own defense, I do try to mark “remember me” on all my accounts so I don’t have to bother with all this password nonsense, but it doesn’t always work. Then I am constantly having to have the company email me new ones, assuming they don’t tell me the email account doesn’t match their records, which also happens quite a lot. Then I just say bad words and say to heck with their company. Either that or I just log in as a one-time guest. Or create an entirely new account. Sometimes, getting into my established accounts is just not worth the hassle!

My husband, who is much more meticulous and organized than I am has all his passwords stored in a data bank. Now if I could only remember his password so I could access the data bank. 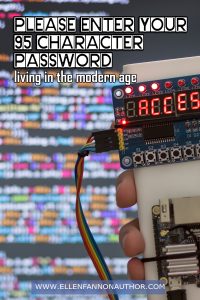