The Pot and The Kettle 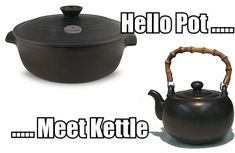 “Hey, Younger Son, the trash needs to go out after dinner,” Older Son instructed Younger Son the other evening as he made one of his rare appearances for dinner.

The hubby and I looked at each other and rolled our eyes. It would never occur to Older Son that he is perfectly capable of taking out the trash. Not when he can delegate. Older Son has been living with us for several months now and regularly leaves us with dirty dishes in the sink, dirty dishes and leftover food in his room, half-finished laundry in the washer and dryer, and living quarters I’m afraid to step foot in lest I disappear among the mountain of chaos, never to be seen again. I generally just shut the door to his room and pretend it doesn’t exist. Still, I live in fear that someone will notify the health department and we will be arrested for allowing a dangerous environment in which to keep pets. I don’t worry about Younger Son’s health, as his room is no better. Unintended science projects are taking up residence in there. But fortunately, even the pets refuse to go into those Bermuda Triangles called our sons’ bedrooms. Even though the dogs are still not housebroken (how embarrassing for a veterinarian to admit), they still have some standards, and restrict their pooping to the cleaner areas of our home.

But that fact that Older Son is less than fastidious about his own living quarters doesn’t stop him from complaining about Younger Son’s lack of cleanliness when it comes to their shared bathroom.

“Can you please tell Younger Son to pick up after himself?” Older Son grumbles at the wet towels and dirty clothes littering the bathroom floor. I very carefully refrain from pointing out that Older Son’s floor looks a lot worse. In fact, most of his clothes, both clean and dirty, live on the floor of his room. I’m not sure how he tells them apart and I’m not sure I want to know.

“Sure,” I tell him. “Younger Son, please pick up after yourself,” I instruct Younger Son. There! That should do it! Because both my sons have always done exactly what they are told.

Periodically Older Son rearranges all his items on one side of the bathroom sink and Younger Son’s items on the other side. “And tell Younger Son to keep his stuff on his side of the sink!”

Hokey Dokey. “Younger Son, keep your stuff on your side of the sink.” Hah! I’d be satisfied if his hygiene items just stayed on the vanity to start with, rather than on the floor, under his bed, on his dresser, and in the kitchen pantry. For that matter, I’d just be satisfied is he used any of his hygiene products, like his toothpaste and deodorant.

It can actually be amusing listening to Older Son lecturing Younger Son about personal space and respect for other people who have to share living space. The old adage about the pot calling the kettle black comes to mind. But whoa to anyone who points this out to the pot. They’re likely to get burned. 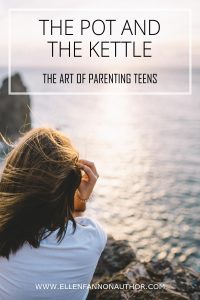