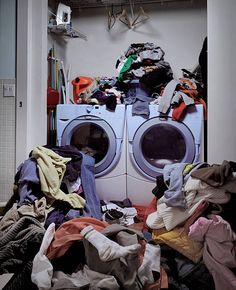 If my blog seems a little disjointed today it’s because I’m trying to write while running up and down the stairs to check on the laundry. Sometimes it seems like I spend half my life doing laundry, although I know, in reality, that’s not the case. It’s more like 75% of my life. I honestly don’t know how three people can generate so much laundry. But then, when I stop and analyze the constitution of our dirty clothes, I realize that about 90% of the never-ending pile belongs to Younger Son.

Younger Son doesn’t believe in hanging up gently worn clothes when it’s much easier to leave them in a heap on the floor where he can tromp all over them, or the dogs can pee on them. He also has no qualms about changing clothes five times a day and leaving the clothes worn for five minutes on the floor. Or going outside in his socks, but that’s another story. His clothes end up all over the house—his bedroom, the bathroom, the living and dining room, the kitchen, the Florida room, and even the front porch. Many times, his dirty clothes remain in his backpack for days until they take up so much room he has to remove them to make room for other things. My friend told me she solved this problem by requiring her teenaged daughter to do her own laundry. I just laughed. Younger Son would simply pick up his soiled clothes from the floor or uncrumple them from his backpack and re-wear them. It wouldn’t bother him in the least to wear dirty, wrinkled, smelly clothes. In fact, he just dug out his boy scout uniform from his trunk, where it had sat since the last campout, to wear on this weekend’s campout. Thank goodness the scouts will be outside where people can stand upwind from him.

I know I should be grateful that I have a modern washer and dryer, rather than having to go down to the river and beat clothes on rocks. If that were the case, I would probably just toss Younger Son in the river, fully clothed, with a bar of soap and tell him to have at it. Or beat him on a rock. But still, doing laundry is such an endless chore. And it doesn’t stop with the washing and drying. There’s the hanging up, folding, and putting away of the clean clothes. I generally don’t mind (well, maybe I do a little, since less than 5% of the laundry is mine), but when I have to constantly evert the inside-out sleeves and pants’ legs and socks, it more than doubles the time I have to waste on this mindless task, when I could be doing more pleasant things like writing a blog about how much I dislike doing laundry. Younger Son just pulls off his clothes, and it’s easier to do when he turns them inside-out.

One might think after all the effort I make to ensure Younger Son has clean clothes, he would at least put them away after I have washed, dried, folded, and hung up his clothes. Nope. More often than not, the laundry basket is left in his room with the folded clean clothes still in it while everything else lands on top of them. One of these days, I’m going to hit my limit and wash Younger Son and hang him out to dry. 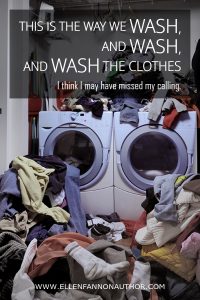