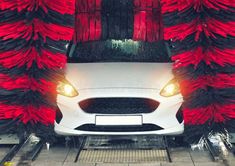 Yesterday I cleaned my car. This might not sound like such a momentous event, but believe me, it is. My semi-annual “clean-up-my-car-whether-it-needs-it-or-not” is a big deal. Generally, the state of my car’s cleanliness has to get to the point (such as not being able to see out the windshield) where I can’t stand it any longer and have to finally “do something” about it. To that end, I ran it through the automatic car wash next to our church.

Yeah, I know what you’re thinking. This is a cop out. Sitting in my vehicle in air-conditioned comfort while it is being scrubbed for me by gigantic soapy brushes in the automated tunnel is not much to brag about. But at the end of the ride, I drove over to the vacuum hoses to clean out the interior, so it’s not as though I didn’t put forth some effort. I used to drag my Kenmore out to the carport and take care of this bi-annual task, but that is such a chore. First, I have to locate all the attachments—and they could be anywhere. Then I have to try not to trip on the cord, which never automatically retracts like it’s supposed to. I also have to watch for pets who take advantage of the situation by running out the door, as well as struggling not to bang the heavy canister against my sensitive shins. Then I have to do the long stretch to the electrical outlet, which is located just out of my reach, and make sure the proper porch lights are turned on. By the time I’ve done all this, I’m too tired to vacuum, let alone lug everything back into the house once I’m finished.

So that is why I take advantage of the powerful vacuum that is included in the small fee for the car wash, after disposing of all the detritus that has accumulated in the car over the past few months into the handy trash bins, also conveniently provided by the car wash. Let me point out that most of the trash is not mine. The vast majority of it belongs to Younger Son, who is very good about bringing his snacks, school, church and sports papers, newspapers, magazines, assorted pieces of clothing, and the occasional toy into the car, but never manages to get them out of the car. I removed trash from the door pockets, seat back pockets, floors, under the seats, and cup holders, and then attempted to wrestle the vacuum hose nozzle where it is attached to its resting place by the force equivalent to the strength of ten elephants. It immediately turned against me and tried to suck my shirt into the nether-regions. After freeing myself from the monstrous suction and saving myself from an indecent exposure charge, I turned it loose on the floor mats and seats, where it miraculously made short work of sand, dirt, crumbs, and petrified French fries. I even remembered to remove my car keys from the cup holder, so as not to have them slurped up and gone forever, which is vital since my other set of keys disappeared over two years ago and has yet to turn up. That’s a whole ‘nother story.

After all that, I drove home, intending to Armor All the rest of the interior, but got distracted by other more pressing matters, such as reading my novel in the hammock. Still, I felt pretty good about what I had accomplished. Then Younger Son climbed into my clean car last night with an open bag of cheese crackers.

As usual, he ignored me. And as usual, I repeatedly nagged him until he finished the crackers and wadded up the empty package, shoving it into the side door pocket.

Next time, I’m making him go to the car wash with me. Maybe I can suck him into the nether-regions with the vacuum hose. 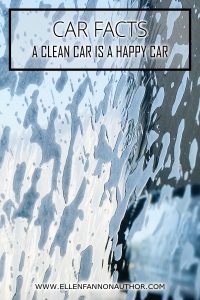