There is a commercial that plays on one of the oldie TV stations advertising a disco cruise with KC and the Sunshine Band, along with some other old disco groups. Every time that commercial airs, my heart beats a little faster until I look over at my husband who has a look of sheer disbelief on his face, as if little green men have invaded our living room. I know what he’s thinking. Who in their right mind would deliberately sign up for a cruise like this?

I am going to go out on a limb here and admit that I like disco. I liked disco back in the seventies and I still like a lot of the disco music. I even learned a few dances, such as “The Bump.” In reality, though, I didn’t spend much of my spare time in actual discotheques, bumping and grinding away under the mirror ball that hung from the ceiling. And despite liking disco, I never saw Saturday Night Fever. Yes, I realize that’s a bit of a contradiction and rather strange for someone who lived through the disco era. But there’s a perfectly good reason—I don’t like John Travolta. (There, I said it. Please don’t inundate me with hate comments.)

Still, I don’t understand why it’s so popular to hate disco. It seems everyone has something snarky to say about disco. When I occasionally confess to actually liking disco, I get these looks from people which make me think they’re just a 911 call away from having me carted off in a straitjacket. Okay, I realize the outlandish behavior of some people in the age of disco were a tad over the top, such as Bianca Jagger riding a real white horse inside New York’s legendary Studio 54 nightclub. And, yes, the apparel was a bit garish with sequins, gold chains, bell bottoms, and stretch polyester.

Being the curious and inquiring person I am, I resorted to googling why people hate disco. Unbeknownst to me, who simply likes disco for the upbeat tempo, and who lives a sheltered and unenlightened life, there was supposedly an undercurrent of racism and homophobia associated with the anti-disco movement. I was blissfully unaware of all this, which is why forty-some years later I am just hearing about it. Who knew? I figured disco simply went out of style like every other fad.

However, many believe the official death of disco occurred on Thursday, July 12, 1979, at an event known as Disco Demolition Night, an anti-disco protest at the hands of a fired, die-hard rock-n-roll DJ named Steve Dahl. Disco Demolition Night was a baseball promotion at Comiskey Park in Chicago, Illinois that ended in a riot. At the climax of the event, a crate filled disco records was blown up on the field between games of the doubleheader between the Chicago White Sox and the Detroit Tigers. Many of those in attendance had come to see the explosion rather than the games and rushed onto the field after the detonation. The playing field was so damaged by the explosion and by the fans that the White Sox were required to forfeit the second game to the Tigers.

Regardless of why it eventually went out of style, I think disco has gotten a bad rap. (If we really want to talk about a genre of music that needs to die, rap is certainly number one on my list.) Besides, without the disco movement, the Bee Gees might never have recorded Stayin’ Alive, which is the perfect song for performing CPR. Using the beat of Stayin’ Alive to administer chest compressions gives the resuscitator the perfect timing with which to pump the victim’s heart. Plus, what song is more apropos in that situation? Think about it. 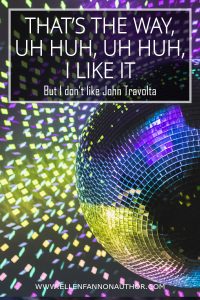