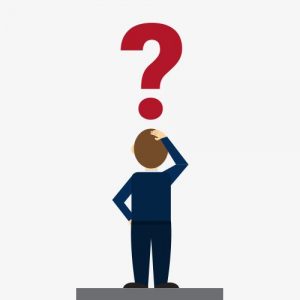 I’m sure you’ve heard the saying, “There’s no such thing as a stupid question,” but let me tell you, that’s simply not true. Not only are there stupid questions, it seems like I am the recipient of a good many of them. Younger Son asked, just the other day, if it was possible that Hitler didn’t die, but rather escaped to Antarctica, where he was abducted by aliens. Sure, it could’ve happened that way, right? Younger Son has an obsession with the bizarre, the outrageous, the conspiracies, and things too crazy to be believed. And if he saw something on U-tube or Facebook, it only confirms his suspicions. Why he doesn’t have this same burning desire to question anything related to, say, algebra or English, or actual events that are going on around him is beyond me. At least half a dozen times a day, on the days he’s speaking to me, I get questions like these.

“Have you ever shaved a cat?” he asked, recently, out of the blue. I don’t even want to know what triggered that question.

“Would you rather burn to death or freeze to death?” was another of his enquiring-minds-want-to-know queries.

Um, do I have to choose one or the other? How about a nice heart attack in my sleep? Is that an option?

It’s bad enough I get them at home, but I am often the beneficiary of the “question of the day” at work, as well. Such as when I’m valiantly trying to save the life of an animal who came in with three feet in the grave and one on a banana peel, and the owner asks, “Can you cut his nails while he’s here?” Or when I show a client the formalin jar containing a dog’s heart full of heartworms and the client asks, “Is that dog dead?” Uh, no, we just keep his heart in a jar of formalin on the shelf. He can bebop along through life just fine without it.

Almost as bad as the stupid questions are the “quick questions.” It’s not that I mind answering client’s questions—after all, that’s part of my job. But I can assure you, the idea of a “quick question” is a myth, somewhat analogous to “this won’t hurt.” These questions invariably come at the end of an appointment in which the client is halfway out one door and I am halfway out the other, already running behind and on the way to the next appointment. Sometimes I have call-backs that don’t give me a clue as to the nature of what the client wants to discuss. I guarantee the call-back that says, “Client has a quick question” will keep me on the phone for a good twenty minutes. “Quick questions” never have simple answers, such as “yes,” and “no.” They usually require a thorough dissertation, which I also guarantee the client will not listen to.

But I’m happy to say that other professions also receive their share of stupid questions, especially the tourism industry. I remember once when we were taking a tour of the national parks and someone asked our guide “what time they let the wild animals out.” Or the time someone asked an employee at a theme park “what time the 5 o’clock parade starts.”

Recently, my husband and I toured Cathedral Caverns in Alabama, and someone in our group asked the guide, “Is it safe to go in the cave?” Without missing a beat, the guide replied, “Don’t worry. If the worst happens, I moonlight as a mortician.”

The best question (or worst, depending on your point of view) I believe I ever heard was when a guest on a cruise ship asked one of the employees if the crew slept on board the ship. He replied, “No, they sleep on a submarine that follows the ship.” He got into trouble for his flippant answer, but seriously, who could blame him?

At the risk of being accused of not wanting to perpetuate knowledge and stifle someone’s thirst for information, let me just say these two words. Google it! 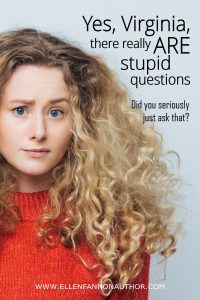