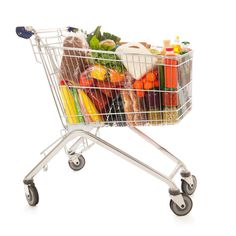 I just broke the first cardinal rule of grocery shopping. Don’t go grocery shopping when you’re hungry. It’s not the first time I’ve broken this rule, so I really do know better, but I couldn’t control the timing. It was a little early for lunch, but of course by the time I stepped through the doors of the store, my stomach reminded me lunchtime would come and go while I was trapped in the aisles with all kinds of tempting food choices. On top of that, my husband was with me, so between the two of us, we probably added another $75.00 to the final damages before making it to the checkout.

Did you know there have actually been scientific studies confirming the fact that you shouldn’t grocery shop on an empty stomach? Common sense and experience alone should be enough to validate this argument without statistical analysis. Like someone needs to fund a research project on this well-known fact rather than waste money finding a cure for cancer. There have been studies claiming that people who grocery shop when hungry tend to load up on more high-calorie foods than people who have eaten before shopping. There was even a study that found hungry shoppers also bought more non-food items. Was there some sort of subconscious drive to fill up an empty basket? There were all sorts of scientific explanations for this behavior, including some nonsense about evolution, but I think it basically boils down to the fact that when you are hungry, the cookies look more immediately satisfying than the lettuce.

All I know is when I am hungry, everything looks good. On the flip side, if I go grocery shopping right after eating, nothing looks good, and I often come home lacking a lot of things I should have purchased simply because they didn’t appeal to me at the time. So, all things considered, I’d rather come home with more stuff than I need than not enough.

You might point out that I could avoid impulse buying by making a list and sticking to it. Hah! I have tried that. Either I leave the list at home or I methodically go down the list and still “forget” something important. Then I still pick up a few items not on the list that happen to catch my eye. No, I have to go up and down each and every aisle to make sure I didn’t miss something. Besides, half the fun of grocery shopping is impulse buying. Otherwise, it becomes a dreary chore.

We finally made it home and spent the next twenty minutes unloading and putting away all the groceries. Then came the hard part. I was really hungry by this time and didn’t feel up to making something to eat.

“What do you want for lunch?” I asked my husband. This is a silly ritual we have gone through almost every meal since we’ve been together. I knew what he was going to say. I was not disappointed. 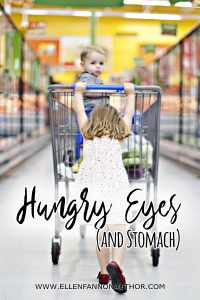