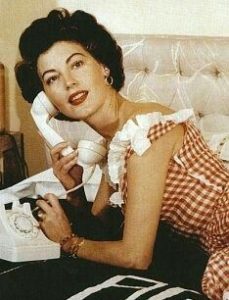 I once heard that the definition of “old” was when the telephone rang on a Saturday night and you hoped it wasn’t for you. Boy, can I identify! And this was even back in the days before I was plagued with robocalls. I may sound a bit curmudgeonly, but sometimes I just don’t want to talk to anyone. Especially during the bonus round of Wheel of Fortune or Family Feud. I hate to get all the way through the game show only to have the climax ruined by an ill-timed phone call. But, as usual, I digress.

When I was a teenager (yes, we DID have telephones back then), I was the stereotypical teenage girl who spent hours on the phone each night and fretted when the phone didn’t ring. Or, even worse, if the phone rang and it was for somebody else. Of course, back then, we didn’t have caller ID or call waiting. We also didn’t have cordless phones, so we were tethered to a small area by a relatively short leash. Our house had two landlines—one in the living room, where everyone could hear our conversations, and one in the unheated attic office. I always chose the attic office in which to conduct my personal business, although it was cold and uncomfortable. I begged my parents to let me have a third landline in my bedroom (not a separate number, mind you, just a third phone), but my pleas fell on unyielding ears. Man, I didn’t even realize how deprived I was, nor how abusive my parents were.

Fast forward to today. At work, I check for messages several times a day. I am always elated when there are no phone calls I need to return. My entire good mood can sour in a nanosecond if I see half-a-dozen calls under my name. I immediately scan the messages to see if I can dump the calls on someone else. The poor technician stuck working with me for the day is often the recipient of a number of these calls. By simply reassigning the call from my employee number to hers, I can often divest myself of spending more time on the phone, which is good, as I have important duties pending, such as checking Facebook on my phone rather than talking on it.

It’s no better at home, particularly when I hear my husband answer the phone and say, “Yes, she’s right here.” Especially if the call came in on his cellphone, from which I feel entitled to be immune. Sometimes, I even hope it is a robocall, as I can at least hang up on them, rather than, say, a chatty relative with an animal question with whom I’m obliged to talk, even if it is at the end of Wheel of Fortune. It’s not that I don’t want to talk to people—then again, maybe it is—shoot, I don’t really know. I just know that with few exceptions, gabbing on the phone is not the thrill it used to be, and I wonder what happened to me. How did I get to this sad state? Perhaps it’s because most calls are from people who want me to do something I really don’t want to do, rather than someone just checking in to see if they can take me to lunch or do my laundry. Or that occasional acquaintance who you can’t get off the phone with and you’ve run out of excuses like, “Sorry, I’ve got to go. The house is on fire.” You can only ignore the caller ID and let the call go to voicemail so many times.

Regardless, my lack of telephone enthusiasm makes me feel old and depressed. Maybe I need to call someone and talk about it. 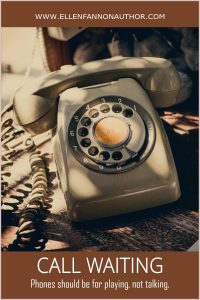