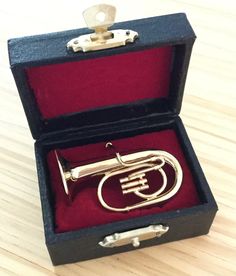 Our front steps are permanently chipped from where Younger Son banged his tuba case in and out of the house every day. The blasted thing is pretty heavy, even with the wheels on the bottom, and Younger Son found bumping it down the steps much easier than picking up the case and carrying it down the steps. Consequently, our steps took quite a beating. It wouldn’t have been so bad if he’d actually practiced the instrument, but instead, it sat in the foyer where we routinely tripped over it until it was time to transport it back to school.

Getting the tuba into the car was another Herculean feat. After a while, I stumbled upon a system that worked, whereby you tipped the top of the instrument case into the backseat, then shoved with all your might to get the bottom part in, closing the door quickly lest it come sliding back out. Having two people working to accomplish this task was a bonus. Once, before I could stop her, a helpful teacher tried to assist, propelling the bottom part with the wheels in first and refusing to take “no for an answer” when the case didn’t budge. She pushed until there was a loud rip from the wheels snagging on the car seat fabric, and then triumphantly continued to shove as the resistance gave way. I tried not to cringe, since she didn’t realize what she’d done. Still, my poor backseat bears the scars.

Finally, there came a point where Younger Son was given a tuba to keep at home and one that stayed at school. That was a happy day! The tuba case sat in our dining room, where I dutifully dusted it every couple of months or so. That’s as much action as the poor instrument ever got in our home. I can’t really believe that the band director was so naïve as to think Younger Son actually practiced at home. Then again, since he had to listen to Younger Son in band class, his lack of practicing was probably fairly obvious. 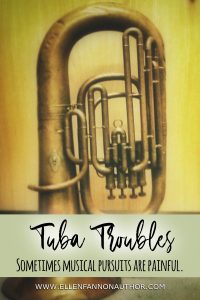