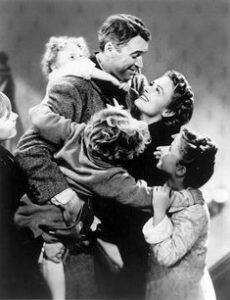 One of my all-time favorite movies is It’s a Wonderful Life. There are four Christmas movies that our family traditionally watches every year—Miracle on 34th Street, A Christmas Carol, The Christmas Story, and It’s a Wonderful Life. We usually save It’s a Wonderful Life for last. We may watch other Christmas movies, but the four are a must. Our holiday season is incomplete without having watched the four. It’s a Wonderful Life also contains my favorite line from a movie, “That’s why all children should be girls.” As the mother of two boys, I can relate to that piece of wisdom. Still, as much as I love the movie, there are a few things about it that bother me. Each time we watch the film, I dutifully point these out to my husband. But one night, I actually stayed awake wondering about these unexplained and seemingly unconnected bits of storyline that apparently don’t bother anyone but me. If you happen to have the answers, feel free to enlighten me.

1. Why is Uncle Billy Bailey Irish and his brother, Peter Bailey, not?

2. Where did Mary get the money to buy the old Grandville Hotel? It seems to me even that rundown edifice would require a fair chunk of change to purchase.

3. How did Mary buy the hotel without George knowing? Wouldn’t he have had to sign something or was the house entirely in her name? If so, how did she manage to secure a loan without having a job? I doubt she was independently wealthy, as George and Mary sure didn’t have any money after the marriage. Hence, Mary’s mother continually trying to push rich Sam Wainwright on her.

4. Why did Mary and George get married on a workday? It was pretty sad that Uncle Billy didn’t get to attend the wedding, while the office clerk did.

5. What happens to the money Mr. Potter stole? In the end, although the town’s people made up the deficit out of their own pockets, was nobody concerned about what happened that caused an $8000 deficit to start with?

6. Why can’t Clarence the angel see the scenes below on earth without his wings? What do the lack of wings have to do with his vision?

7. Why does Mr. Gower, the druggist, have poison on his shelf with medications? What possible use would a pharmacist have for poison? And why was he smoking a cigar while preparing medications? Isn’t that rather unsanitary? Not to mention his drinking on the job.

8. Why does Mary say, “thank you,” when George says, “it still smells like pine needles around here?” Was that supposed to be a compliment? If so, he didn’t say it like a compliment.

9. Why is Nick, the bartender, a nice guy in real life, but a mean guy in the alternate reality Clarence shows George in a world in which he never existed?

10. It seems rather convenient to me that Mary, in the alternate reality, is a homely old maid. Wouldn’t it have been more likely that if George wasn’t born, she would have married Sam Wainwright and be living the life of luxury in Florida?

11. Why does an angel get its wings every time a bell rings?

I hope I haven’t ruined the movie for you by mentioning these nagging little loose ends. But if I did, I’ll quote my second favorite movie line. Frankly my dear, I don’t give a d—. Don’t fret too much about the details, and have a Merry Christmas. 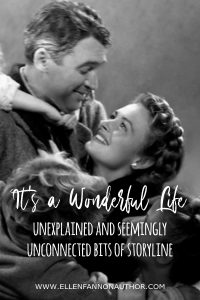