Deck the Halls with Broken Decorations 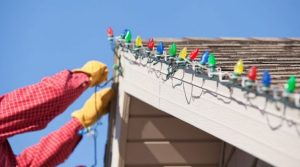 We finally got our Christmas decorations up. It seems to get harder every year, especially since we have an unwritten rule that we can’t start until after Thanksgiving. I suppose we could cheat, like other people, and start decorating before Thanksgiving, but there’s just something that clashes when you mix the red and green colors of Christmas with the fall colors of Thanksgiving. I don’t know if Christmas decorating is becoming more difficult because we’re getting older (surely not) or because over the years we have accumulated a lot of Christmas stuff.

One of these days, I’m going to actually organize all our Christmas decorations into the ones we want to display and the old worn out ones that we haven’t put up in years. As of right now, everything is mixed together, so each year we have to go through each box to separate the decorations we want from those we don’t. Then again, who am I kidding? By the time we de-decorate, all I want to do is shove everything back into boxes and put them away as quickly and painlessly as possible. But my intentions are good. You might ask why I don’t just throw out the old decorations that I will probably never again display. Well, that’s a good question. The answer is, I don’t know. I just can’t. Who knows but what I may resurrect them someday down the road. I may get ambitious and fix all the broken pieces I have been meaning to fix for years.

This year I was very careful to make sure that all the lights I put up on our fence worked. We have several strands with burned out sections that are too much work to try to trouble shoot, but at least last year, we labeled them as such. I meticulously checked each strand of lights before laboriously going through the long process of attaching them to the fence. I even had them plugged in while I worked so I could be sure they were all lit. No sooner had I gotten them in place than I discovered a section of lights right along the front of the fence were out. My poor husband tried his best to find the offending bulb and even replaced it with multiple combinations of other working bulbs, as well as tin foil. But no luck. The section is still out. However, on another section of lights that was labeled “out,” we simply draped the faulty few feet over the fence and moved to the next section. For some reason, the malfunctioning lights decided to come on after hanging over the fence for more than a week. Now we have one tangled glob of bright lights hanging vertically all by itself.  I just shrug my shoulders and think that next year, perhaps we can get it right.

We put our live tree up last weekend and spent two days decorating it. Then, as we sat down to lunch, several ornaments slid off the branches and broke.  I couldn’t even blame the usual culprits, the cats. Apparently the branches weren’t quite strong enough to hold some of the ornaments, or we didn’t clamp the hangers down tightly enough. Realizing that at the rate ornaments were falling off the tree, we wouldn’t be left with much by Christmas, I spread a thick blanket under the tree to catch any other causalities. It looks a little odd, but it’s doing the trick. At least until the cats scratch it up to their liking and lay on it.

Speaking of the cats, they have once again invaded my Christmas village, knocking over the figurines and tearing up the cottony “snow” with their back claws. I may have to resort to the upside-down mousetraps to try to deter them from nesting in the village, but the mousetraps look a little strange amidst the decorations. Ah, the joy of pets.

I suppose I can kiss my chances of my home being featured in the Christmas issues of Southern Living or House Beautiful, as well as the area’s Parade of Homes goodbye. Instead, our home could easily be an advertisement for the movie, National Lampoon’s Christmas Vacation for “if it can go wrong, it will go wrong.” Still, it is the imperfections that make the holidays memorable. Plus, our Christmas tree hasn’t fallen over once this year! Yet. 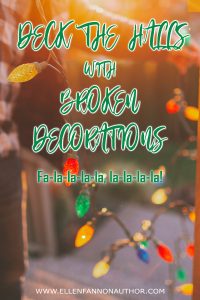