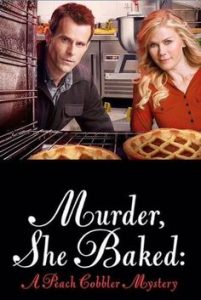 I have to admit I have pretty much given up on Hallmark romances. With every movie synopsis starting out with “Lead character returns to her hometown . . .” and being a cookie-cutter of the last one, I can only take so much of the same plot over and over. Still, I generally like the Hallmark mysteries, as there is usually something unexpected to look forward to. But lately, even those have become cookie-cutter Murder She Wrote wannabees.

I mean, really, other than providing information, how many police departments actively involve civilians to help them solve their murders? In every Hallmark mystery movie, the case is always solved by a nosy, interfering civilian, who generally makes life difficult for the trained professional crime fighters, as well as putting herself (it’s always a woman) in harm’s way, requiring the professionals to save her bacon in the end. Currently, Hallmark has a librarian, a contractor, a crossword puzzle editor, a doctor, a baker, a restaurant-owning /cooking show host, a matchmaker, an archeologist, a florist, a photographer, an antique-store owner (although that series got canned because the lead actress got arrested for fraud- and bribery-related offenses in a nationwide college entrance exam cheating scandal), and a lawyer who dabble with solving murders in their spare time. There may be some others I’ve forgotten. If these civilians are so good at solving murders, why don’t they quit their day jobs and join the police force? At least then they would get paid and have a legitimate reason for sticking their noses into police investigations. For that matter, these individuals seldom actually work at their paying jobs, except maybe in the very opening scenes of the movies. Otherwise, they are always dumping their responsibilities on co-workers as they chase down clues and drag other people into their drama.

At least in some of the movies, the police have the good sense to get irritated with the interference, and repeatedly tell the amateur sleuths to “leave the police work to the police,” but the latest new mystery, featuring a crime-solving hairstylist, really went beyond the unbelievable. (Not that any of the scenarios are believable, mind you, but I can’t even play along with the newest one.) The sheriff, who worked with the hairstylist’s killed-in-the-line-of-duty policeman husband, is apparently clueless and incompetent, and constantly comes to the hairdresser for advice and to keep her posted on confidential information. I could only shake my head and ask why she didn’t run for sheriff. She sure wasn’t doing much at the beauty salon, where she whipped a drape over her customers, went through the motion of running a comb through the back of their hair, pretended to scissor the back of their hair, and pronounced them “done.” All within a minute and a half. Their hair looked exactly like it did before they sat in her chair. This, to me, is the real mystery.

It makes me wonder if Hallmark only has one burned-out writer on staff, who simply changes the names, locations, and occupations of the characters for each script and leaves everything else the same. That would explain a lot. I am tempted to offer my services, but the deviation from the standard might be more than Hallmark viewers are ready for. And at least now, if you miss most of the movie, you have the advantage in that you always know how it will end. 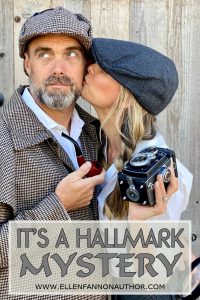