Now Get This! The Dog LIVES! 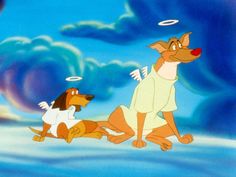 I recently saw a T-shirt that says, “I don’t care who dies in a movie as long as the dog lives.” And I thought how much that saying describes me. This is so true of dog lovers, right? Depending on the character, it may be sad when a person dies in a movie. I will admit to getting a little choked up each time I watch Gone With the Wind when Melanie dies. But nothing compared to losing Old Yeller. According to sources on the Internet (which must be true), even Hitler loved animals and didn’t like to see dogs die in movies. This example just goes to show how deeply the death of man’s best friend on-screen affects most of us at the visceral level. And the death doesn’t even have to be shown. The mere yelp of the animal off-screen followed by the humans’ reaction is enough to give me a sick feeling in the pit of my stomach. Why did the innocent animal have to die? The psychopath can kill as many people as he wants, just leave the dog alone.

Did you know there are more than fifty films in which the dog dies? Fifty! And other than Cujo, I’m not okay with that. Even poor Cujo was, in a sense, a victim. It wasn’t his fault he was bitten by a rabid bat. He didn’t intentionally turn into a monster, terrorizing a mother and her young child. It was the virus taking over his brain and his personality that was responsible for his deadly transformation. I won’t go into all fifty-plus movies in which the dog dies, but there are a couple in which simply thinking about them is enough to upset me—the reason being not only because of the death of a beloved canine, but because of an incompetent veterinarian.

I’m going to just out-and-out say this: Marley, the beautiful yellow Lab of Marley and Me, whose brain fairy had finally come in the end, did not have to die! After his first episode of stomach bloating, the veterinarian should have done a gastropexy on him to prevent future problems. A gastropexy is a surgical procedure where the stomach is tacked to the wall of the abdomen preventing it from twisting and causing a life-threatening condition. Did the veterinarian mention this to Marley’s owner? No! (Okay, I will grudgingly admit there may have been more going on behind the scenes with this decision than the viewer was made privy to.) But all that was presented in the movie was the poor owner being told this problem would undoubtedly recur, at which point there would be nothing he could do. What? I’m still angry about that. Then, surprise, surprise, Marley bloated again. Did the veterinarian even suggest emergency surgery? I don’t know, maybe he did and I just missed it. All I know is Marley ended up being put to sleep and I still get teary-eyed thinking about how his death could have been prevented. To make matters worse, this movie was based on a true story.

The other movie that tears me up is Turner and Hooch. After all the time it took Turner to bond with and grow to love Hooch, why did Hooch have to die in the end? Why couldn’t this film have had a happy ending? The potential was there for a happy ending, with Hooch being a hero for saving Turner’s life. And the veterinarian, who later married Turner, was not much help. Initially, she berated Turner for what she believed was his negligent care of the dog without hearing the facts. Most veterinarians I know do not make owners feel even more guilty when they ask for help with their pets, no matter how negligent, or more likely, misinformed they are. Then, when Hooch got shot, the woman couldn’t even get an IV started on him. All she did was tell Turner to hold pressure on the external wound (like that was going to do anything for internal bleeding and multiple organ trauma) while she watched the dog fade away. Granted, there wasn’t much she could have done, but it was as if she didn’t even try. The real kicker came at the end of the movie (spoiler alert) where apparently Hooch (a French Mastiff), prior to getting shot, had managed to impregnate the vet’s collie, and the litter of mixed-breed puppies turned out looking like pure-bred collies with one French Mastiff who looked like a miniature Hooch. As if that weren’t improbable enough, what vet doesn’t spay her own dog? (This is why my husband dislikes watching animal movies with me.)

There are other movies where the dog dies that sadden me, like the dark humor of National Lampoon’s Vacation where the Griswold family forgot Aunt Edna’s dog, Dinky, was tied to the bumper of the car and drug him to his death. (At least we assume his demise, as all that is found is his leash and collar still tied to the bumper.) To me, this was way over the top, not funny, and much worse than discovering Aunt Edna had passed and tying her dead body to the roof of their car. At least Aunt Edna died of natural causes, not from being drug behind a car. The worst part is that nobody seemed to care.

Now that I’m on the verge of blubbering over dead dogs, I’ll move on to happier thoughts. As devastating as it is when the dog dies in the movie, we can at least be comforted by this fact: All Dogs Go to Heaven. 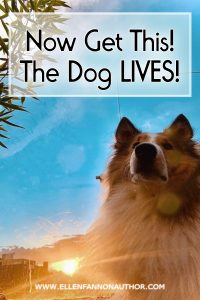