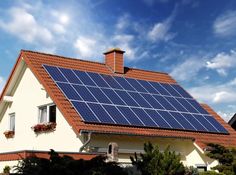 I want to apologize to all my friends who live in the Sunshine State. The beautiful spring weather we had that abruptly turned into cold, dreary, rainy, miserable days last week is all Hubby’s and my fault. You see, we got solar panels.

This all started back a few months ago when I was lured into reading an ad for solar energy while I was perusing Facebook in an effort to keep in the loop with friends and family. This led me to naively enter my contact information in the futile attempt to get a rough idea on how much solar panels would cost. That’s all I wanted to know. Of course, that idle curiosity on my part snowballed into the solar panel people calling night and day. As is my custom with unwanted phone calls, I simply ignored them. But they were not deterred. Finally, Hubby answered the phone and made an appointment to meet with a representative. O-kay.

We made an agreement with each other that we were not going to be snookered by a great-sounding sales pitch into actually buying solar panels without giving the matter considerable thought. We also made that same agreement right before the time share presentation and the camping membership that we now own. Plus, the new windows. About ninety minutes after meeting with the sales representative, we signed on the dotted line to become owners of solar panels. In our defense, the guy was really, really good and made some excellent selling points, none of which I can repeat. So far, so good. Besides, who doesn’t want to do their part for clean energy?

Our roof was inspected and our solar panels were installed in December. A sign was placed at the end of our driveway which reads, “We’ve gone solar.” All that was left to do was paperwork and permits and other such bothersome details that I don’t get involved in, and for the power company to simply come out and turn everything on. So, we waited. And waited. And repeatedly called and texted the solar panel company representative who was very nice and assured us they were “working on it.”

Meanwhile, Gulf Power was bought out by Florida Power and our electric bill skyrocketed just like everyone else’s. Only now, we were still paying the electric company, as well as the loan we took out for the solar panels. I will say that after pointing out the unfairness of this new arrangement to the solar panel company, they graciously paid our first month’s solar panel loan. And day after day, the sun shone brightly on our non-functioning solar panels, while our electric bill continued to rise. Then we read disturbing news in the paper about how the government was going to stop allowing solar customers to sell excess solar-generated power back to the power companies at the same rate we were charged for electricity. (What? I thought Uncle Sam was all for going green!) The legal technicalities went way over my head, but even the solar panel company could not tell us if we were “grandfathered in,” or how this new rule would affect us. Adding to this stress was the fact I felt like a fraud because we had not yet gone solar but had a sign out front stating we had.

And did I mention that day after day, the sun continued to shine on our nonfunctioning solar panels? Well, it is worth repeating, as we experienced the frustration of potential free energy wasted as our solar panels were not sucking up that precious resource. Finally, finally, the power company came out and did whatever it is they do and our solar panels are up and running. (I think.) Since then, the sky has been gray and foggy. I’m afraid we are personally responsible for The Sunshine State losing its sunshine. Florida may need to be renamed “The Sunless State.” We didn’t mean to mess with Mother Nature. It was just inevitable. 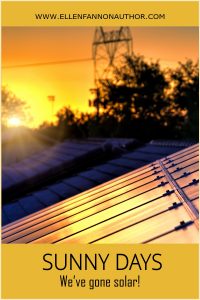