Will That Be For Here or to Go?

Whenever I go out to eat in a real restaurant, as opposed to the ones where you get your food in a bag with a toy, I generally have trouble finishing my meal. It always seems like the portions are too big for me. I would order from the child’s menu, but restaurants tend to frown on that if you’re over twelve, or, in my case, over sixty. Besides, the child’s menu, as well as the senior’s menu, are usually pretty limited. I wish restaurants would offer smaller portions at smaller prices, but most haven’t seen fit to do this. However, it’s okay because whatever my husband and son don’t finish for me, I can take home to eat another day. These leftovers used to be sent with the customer in what was called a “doggy bag,” but people are much savvier today about what should and should not be fed to a dog. Plus, who in their right mind would give expensive prime rib or chicken marsala to their dog? Well, unfortunately a lot of my clients, whose pets eat better than I do, but that’s another story.

But not me. My yummy leftovers are for me. (Or someone in my house who beats me to them.) My dogs eat—wait for it—dog food! Bringing home what I can’t finish in a restaurant actually works out pretty well, as I get two great meals instead of one. That is assuming I manage to get the to-go box from the restaurant table to my house. I can’t count the number of times I have left my to-go box sitting on the table in the restaurant, or occasionally at the cashier’s stand in restaurants where the wait-person doesn’t directly take the check. I have even left my to-go boxes on the hood of my car or in my car.

After I have overcome the hurdle of getting the leftovers from the restaurant, to my car, from my car, and into my refrigerator, the next challenge is to remember to eat them. It’s usually not too hard because I have a huge black or white Styrofoam container taking up space in the refrigerator. Plus, the food is generally way more appetizing that whatever else I have in the frig, so it gets eaten relatively quickly.  Sometimes, though, the smaller boxes get pushed to the back, where the contents turn into science projects before I recall I brought them home two weeks (or a month) ago. Oh well, at least my intentions are good.

I suppose I could blame my advancing years for my forgetfulness, but this lapse of memory when it comes to getting my doggy bag home has been going on for decades. I think the absolute best (worst) place I ever left my to-go box was in my date’s car. Obviously, this has been more than a few years ago— like forty-plus—but some events are just too memorable to let go. Let me preface this by saying that the guy I was dating and I often pulled practical jokes on each other. We had gone out for seafood, no less, and as usual, I couldn’t finish my dinner. So, I packed it up and took it with me. And forgot it at the end of the evening. It apparently disappeared under the passenger seat, where it stayed for several days, in the middle of summer. The poor guy told me he kept smelling this terrible odor in his car, but couldn’t tell where it was coming from, until he finally discovered my leftover fish. Oops! I couldn’t have pulled off a better prank if I had planned it. Miraculously, he was still speaking to me and actually believed I didn’t do it on purpose.

Perhaps I should just give up and leave the uneaten food at the restaurant. But that goes against everything I was ever taught by my frugal Depression Era parents. After all, waste not, want not. Well, that only works if what I want hasn’t been left behind. 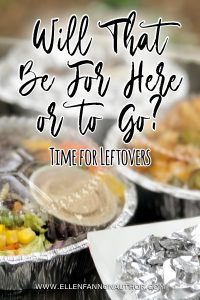