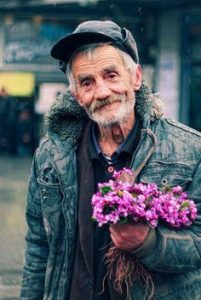 There was an interesting letter in the Dear Abby column of the newspaper today. It seems an elderly gentleman in poor health was concerned about his much healthier soon-to-be widow. He wanted to fix her up with a new man so that she would have a mate after he was gone. He went on to describe all her wonderful characteristics and just what he was looking for in his replacement. The qualifications he listed for “us to meet a man,” were as follow: the man should be younger than his youthful eighty-year-old wife, in his seventies, preferably widowed (not sure why), physically active, romantically inclined, energetic, capable with tools and household projects, not addicted to drugs or alcohol, financially independent and preferably politically conservative.

Whew! What a list! Considering that the odds of a woman that age finding a new mate are less than the odds of being struck by lightning, I would say that gentleman had some pretty fanciful and unlikely goals for his widow’s future husband. Assuming there were such a man available, he would probably be looking for a woman in her thirties or forties, not eighties. Once a woman passes a certain age, when the ratio of eligible men to women is somewhere around 1:10, she is lucky to find a man with a pulse. Not surprisingly, his wife expressed little enthusiasm for his suggestion. She was probably contemplating her freedom in not having to pick up dirty socks off the floor and having the toilet seat permanently in the down position.

Still assuming she were interested, this disparity between available older men versus older women is so inherently unfair. I am reminded of this fact the older I get. If I were to kick off, there were be no end of widows lined up at my husband’s door bearing casseroles, eager to help him through his grief. He tells me not to worry. He doesn’t like casseroles. I think he’s deliberately missing the point. I have no doubt that he would be propositioned half-a-dozen times at my funeral and be remarried within three months. I am okay with that, as long as he keeps my ashes in an urn on the mantle along with two perpetually lit candles, and requires the next Mrs. Fannon to dust me once a week.

I, on the other hand—assuming my husband predeceases me—have no illusions about being courted by a plethora of available men anxious to make me their next bride. As I said earlier, at my age, I would be lucky to find one who breathes regularly. Not that I’m thinking of shopping around, mind you. The thought of trying to break in a new spouse is too daunting to even contemplate. Still, the thought of my husband “interviewing” applicants for his replacement, like the gentleman who wrote to Dear Abby, tickles me. We discussed the situation briefly and he came to a logical conclusion.

This is what he told me. “It would be easier if I just got you another cat.” 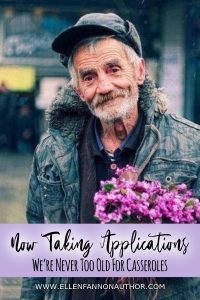