Beware of Friday the 13th 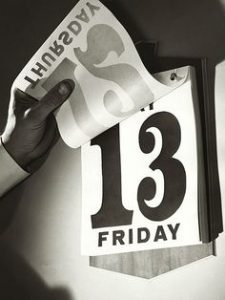 Who noticed that last Friday was the 13th? Every calendar year has at least one Friday the 13th and may have as many as three. There is even a word—Paraskavedekatriaphobia—for the fear of Friday the 13th. Try saying that word fast five times in a row. (Or, for that matter, try saying it at all!) Although I’m not superstitious, there still is that little hint of “watch out” that creeps into my awareness when I realize it’s Friday the 13th. For example, I really don’t like doing surgeries on Friday the 13th as I don’t want to push my luck. But for the most part, Friday the 13th is just another day to me—provided I don’t have to see any black cats and it’s not a full moon. Or I don’t break a mirror, spill salt, or walk under a ladder.

There are several theories as to the origin of why Friday the 13th is unlucky, including the fact that there were thirteen people at Jesus’ Last Supper, one of whom betrayed Him. Jesus was then crucified on Friday. However, there are other stories concerning the origin, including one from Norse mythology in which there were twelve gods who had dinner at Valhalla, but they were interrupted by a 13th guest, Loki. (Not sure if Loki was uninvited or just late.) It is said that Loki tricked Höðr (the blind god of winter) into shooting his own brother Baldr (the god of summer) with a magical spear tipped with mistletoe. I’m sure there is a lot more to this story, such as why would a god be blind in the first place, why would a blind god be messing around with a spear if he couldn’t see what he was aiming at, and what is the significance of mistletoe? But I didn’t take the time to do more research. Sorry. I’m a lazy blogger. Friday, October 13, 1307, is also the day on which the Knights Templar were wiped out by King Philip of France. And executions in the late 19th century America were held on Friday.

Regardless of your aversion or lack thereof to Friday the 13th, here are a few jokes to lighten up the fated day:

1. “Did you know that Christmas day falls on a Friday this year?” said one blonde to another.
“Oh dear!!” her friend replied, “I hope it’s not the 13th?”

2. I don’t worry about Friday the 13th. It’s bad luck to be superstitious.

3. People are scared of Friday 13th. I’m not, but I am scared of April 1st, because if something bad happens to you, no one will believe you.

4. What do Italian’s eat on Friday the 13th?… Fettuccini Afraid-o.

5. What’s way worse than Friday the 13th? Monday the whatever.

So, since you’ve obviously made it through Friday the 13th this year, remember, you have Monday the 16th coming up. Happy Monday! 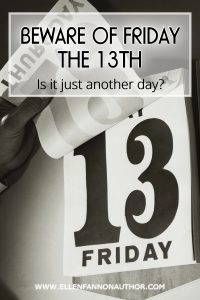