The Secret to Getting on the “Do Not Call” List 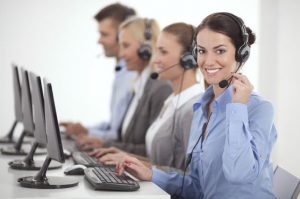 The other morning, as I was blissfully sleeping in on my day off, my sleep was interrupted by yet another telemarketer. I picked up the phone and mumbled a semblance of “hello?”

“Good morning,” chirped a cheerful unfamiliar, foreign-sounding voice at the other end. “How are you today?”

“Not good!” I snapped. “You woke me up.” I hung up and only felt a tiny bit guilty for being so rude to a telemarketer who was rude enough to wake me at an early hour. Then I kicked myself for not adding, “And please take me off your call list!” Not that asking to be taken off her list would have done the least bit of good. She had probably already sold my number to a hundred other telemarketers. In her defense, it might have been a perfectly reasonable hour to call someone in India, but here in the US, there should be a law against telephoning anyone before nine a.m. But her question got me thinking, which is not always a good thing.

When people ask the generic question, “how are you,” it is a safe bet to assume that outside of your closest circle of family and friends, most of them really don’t want to know. Especially a telemarketer. It is a rhetorical question to which they don’t expect a literal answer. They want the usual answer of “fine,” so they can get on with whatever it is they want from you.

So, the next time a telemarketer asks me how I am, I’m going to unload on them like they were my therapist. “Well, to be perfectly honest, my back is killing me. I slept on the heating pad all night and it barely made a dent in the pain. I really need to get back to physical therapy, but that’s so hard to do, you know. On top of that, my shoulder has been bothering me and the doctor said that he has done everything short of surgery, and since I don’t want to have surgery, I’m just waiting it out. It will stop hurting eventually, don’t you think? But the doctor took me off the nonsteroid anti-inflammatory medication because it interfered with my blood thinners for my heart condition, so since then, my arthritis has started acting up again. It’s tough getting old, isn’t it? Speaking of my heart, I wish the heart monitor next to my bed would stop going off in the middle of the night. They tell me the system is just “updating,” but every time it starts flashing, I’m worried that I’m having a heart attack. What do you think?”

(Here, I do not pause for breath to allow them to express their opinion, as I plow on.) “Then my grown son moved back home with his big dog who digs holes all over the back yard. I nearly broke my ankle falling in a hole last week. But at least he didn’t bring two kids with him. Ha, ha! It was nice being an empty-nester, but let me tell you, that didn’t last long. And he doesn’t have to pay the electricity bill, so it doesn’t matter to him that he cranks the air conditioning down to sub-zero temperatures and leaves his bedroom windows open. Do you have kids? (Again, don’t wait for an answer.) But he can’t afford to move out, not with housing prices so high. Honestly, I don’t know where working-class people are supposed to live. This economy is in a real mess, don’t you think?”

I finally stop talking and wait for them to respond. But I’m willing to bet at this point, they have hung up. Even better, I imagine I have finally made it on to their “do not call” list. 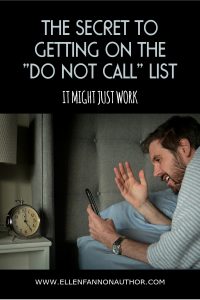