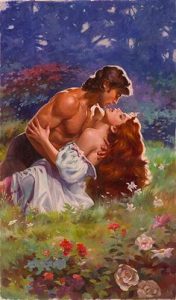 Since the Northwest Florida Daily News no longer delivers a Saturday paper, and since I have to have something to read at the breakfast table, I pulled out the new novel my book club is reading for this month. This month’s selection is an Amish romance. Now, ordinarily, I’m not overly fond of romance novels unless they contain another element, such as suspense or history. Nor am I particularly drawn to Amish literature, except for the fact that it is almost guaranteed to be clean by the very nature of its genre. Nevertheless, I dove into the book with an open mind, as I can generally find something entertaining in most genres—with the exception of Sci-fi and erotica—provided the writing is good.

I had only read through the first two pages when the male love interest was described in stereotypic fashion as “tall with powerful, strong shoulders.”

“Why is it,” I asked Hubby, “that all the male protagonists in romance novels are tall with powerful, strong shoulders?”

“I’ll bet money he also has a ‘chiseled’ chin,” I muttered. I read on. Nope, but he had a firm, square jaw. Close enough.

“What’s a chiseled chin?” Hubby asked. He rubbed his hand across his jaw. “Is my chin chiseled?”

“Your chin is fine. But why is it that the male love interests are never short and scrawny with weak chins, spaghetti arms, and Coke-bottle glasses?” I persisted. “Don’t those men deserve love, too?”

“How about chunky?” asked my chunk-a-chunk of burning love hubby.

I read on, and sure enough, the female protagonist was tall and pretty with a beautiful figure. Female love interests are never short and dumpy with pock-marked skin and stringy hair.

“I’ll bet the plot centers around the fact that they are both desperately attracted to each other, but each of them mistakenly believes the other is not attracted to them, like it isn’t obvious to everyone except the obtuse main characters. So rather than actually talking to each other about their true feelings, they have to guard their hearts and walk on eggshells around each other. Not only that, but they are each harboring a secret that they can’t share which makes them ineligible for true love. Who does that in real life?”

“Well,” Hubby hedged, “when I asked you out for the first time I told you it was because I had a coupon for a two-for-one dinner that was getting ready to expire. I didn’t want you to think I actually was attracted to you or anything.”

“That doesn’t count,” I told him. “I saw right through that flimsy excuse of the soon-to-expire coupon.” I went on. “I’ll bet through the whole book, the two of them dance around their feelings, while at the same time, electric sparks shoot up their spines when they accidently touch each other. I’ll also bet that they don’t kiss until somewhere near the end. Makes me wonder where little Amish babies come from.”

“It doesn’t sound like you actually need to read the book,” Hubby pointed out. “You have it all figured out.”

I stared at him. “What? Of course I have to read the book. Who knows what other juicy details I can find? I could get material for a whole ‘nother blog.” 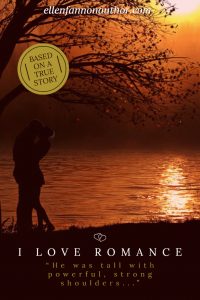