The Battle of the Thermostat 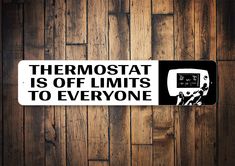 I believe I’ve mentioned once or twice (or fifty times) about my adult son who moved back home a few months ago. I believe I’ve also mentioned about his propensity to set the downstairs thermostat to “meat locker,” and leave it there, regardless of whether he is home or not. He also has the propensity to leave his windows open while the air conditioning is set to “meat locker.” Did I also mention that he doesn’t pay the electric bill?

Now, granted, I am one of those people who would be cold on the equator in the middle of August wearing three layers of clothes and a parka. I “get” that my internal thermostat and that of other people’s don’t always gibe, which is why I grin with my chattering teeth and bear it when I am forced to endure artic air conditioning everywhere I go. But it’s one thing to put up with the discomfort of frost bite in public places over which I have no control. It’s quite another to pay through the nose for the privilege of freezing my tush off in my own home.

For the longest time, Hubby had a sign hanging on the downstairs thermostat saying, “If you do not pay the electric bill, DO NOT TOUCH THIS THERMOSTAT.” It worked about as well as expected. In other words, it was largely ignored. Not only was it ignored, but one had to move the sign to get to the thermostat control and the automatic fan, which was often set to stay on. To ease Older Son’s misery of living in our sauna, we got him a large fan, that is left on in perpetuity in his bedroom. I have refrained from regaling him of my intolerable childhood summers in Ohio, where we didn’t HAVE air conditioning—even though I am at the perfect age and experience level in my life to harp about how tough things were “when I was your age.”

The battle over the thermostat finally came to an end when we installed our solar panels and got new programmable thermostats that can be set remotely via phone. Hubby has set up a schedule to raise the temperature when nobody is home, which works fairly well. However, as usual, Older Son simply resets the thermostat to sub-zero when he is home, and leaves it there. Little does he know that it automatically resets every hour.

Hubby and I were on the road for a three-day camping trip a couple weeks ago. As we were driving along, hundreds of miles from the thermostat, Hubby pulled out his phone. (Yeah, I’ve tried to keep him from doing that while driving, but you know the adage about teaching old dogs new tricks. Separate blog topic.)

“Of course he does. We’re not there to monitor the temperature,” I replied.

“So he thinks.” Hubby punched something in his phone. “There! I’ve just reset it back to ‘Sub-tropical,’ ” he said, with a mischievous grin on his face.

We had a good laugh about thwarting Older Son’s lack of concern for our electric bill (or consumption of solar power) while being miles from home. It’s bound to drive him crazy, but then we figure he’s been driving us crazy for years. Turn-about is fair play. 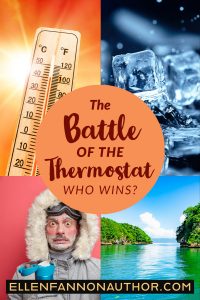