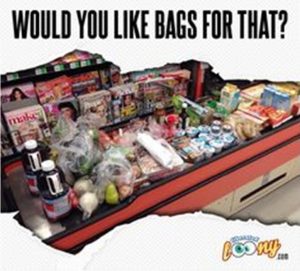 The other day, before work, I had to make a quick dash into the grocery store for one item. We were celebrating someone’s birthday at work, and I was expected to bring my standard fare of chips.  As usual, I was running late and in a hurry.  We type A personalities are always in a hurry, even if there’s no place to go or nothing to do, so you type B’s, please get out of our way!  Anyway, I fast walked through the store and up the chip aisle, grabbed my family-sized bag of Lay’s sour cream and onion chips, and headed for the express lane.  This is where things got ugly.  The person in front of me clearly had more than twenty items in his basket, as he slowly and methodically set each one on the counter.  I felt my blood pressure rising as I counted his items. Now I realize I blogged about grocery cart rage a few weeks ago, but let’s face it, there is just so much material, I know I can stretch this out for at least a couple more blogs—like this guy in the “20 items or less lane” who obviously had more than twenty items in his basket.  Please tell me I’m not the only one who counts the things in the basket of the person in front of them in the express line.  Invariably this happens to me when I’m in a hurry and just need to pop into the store for that one thing and then find myself stuck behind someone in the express lane who can’t count.

I did a slow burn as I waited behind this thoughtless person with my one paltry item.  I wanted to point out to the cashier, “Hey, this dude has twenty-six items in his cart.  Didn’t you verify that before checking him out in the express lane?  After all, as an employee of this fine establishment, it is up to you to make sure the rules and regulations of this fine establishment are followed.  If you let him get away with it, sooner or later, someone with twenty-seven items will try to sneak through, and the problem will only escalate from there.”

As to the clueless shopper in front of me who was wasting my valuable time by breaking the rules, I wanted to ram him with my shopping cart and mutter derogatory remarks, such as, “Didn’t they teach you to count in kindergarten?”  Or, “Dude, five cases of beer does not constitute one item, even if they are all the same brand.”  Or, “Can’t you read?  Twenty-six is not the new twenty!” But as usual, I held my tongue because I am not a confrontational person.  Plus, I didn’t have a shopping cart, as I was in the express lane with one bag of chips. My look, however, could have skewered and roasted him.  Clueless, finally realizing there was someone behind him (probably because the daggers I was shooting were jabbing him in the back), turned around to give me a sheepish grin and a shoulder shrug.

“Sorry,” he managed, rather insincerely if you ask me, as he placed his last item on top of the already bulging heap on the conveyer belt.

“You’re not sorry at all, Mr. The Rules Don’t Apply to Me!” my brain screamed at him, while my stupid mouth mumbled, “No problem.”  Seriously, did I just say that?  Now I wanted to smack myself for being such a pushover.  It’s wimpy people like me who allow inconsiderate people like him to get away with selfish behavior.  Now I was mad at both of us.  But there was nothing I could do at that point.  Unless he pulled one of the two ultimate, capital punishment deserving, check-out taboos—having something which needed to be price checked or writing a personal check which needed to be approved.  If either of those scenarios transpired, I would be forced to let loose with one of my famous Fannon sighs, which has put fear and trepidation into the hearts of many men.  Lucky for him, he didn’t. 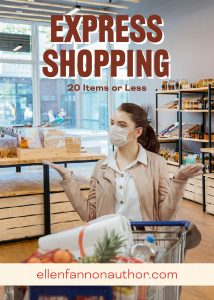