Do You Know Why I Stopped You?

I can count on one hand the number of times I have been pulled over by the police for traffic infractions over the last fifty years—and all of those were deserved. I am grateful for those who have dedicated their lives to “serve and protect,” and am happy to say they have always responded when I needed them. Unfortunately, due to a few rotten apples, the police in this country have been getting a bad rap over the past few years to the point where many cities are having trouble recruiting and keeping enough police officers to meet their needs. The result of this shortage is becoming painfully obvious in terms of increased crime. Yes, as in every other profession, there are a few police officers who should not be working in law enforcement. There are also some bad doctors, teachers, lawyers, judges, auto mechanics, and waiters. (Believe it or not, even some bad veterinarians.)

I pretty much took our police for granted until I lived in Indonesia for two years. There is nothing like living in a third world country to make one appreciate how good we have it here. In many third world countries, corruption is the norm, and Indonesia is no exception. Caucasian, in Indonesian, translates to “rich,” regardless of whether that stereotype is warranted or not. There don’t seem to be any rules of the road or designated traffic lanes, and motorcycles carrying several people weave in and out of cars (or onto the sidewalks) at will. Besides the precarious driving conditions, we also drove on the left side of the road and the driver’s seat was on the right side of the vehicle, requiring us to shift gears with our left hand.  An accident involving a foreigner is automatically the foreigner’s fault, and the crowds tend to exact vigilante justice right on the spot. Because driving was so dangerous, most ex-pats, ourselves included, employed a driver. But there were times, such as on the weekends, evenings, or when our driver wasn’t available, that we drove ourselves. I generally didn’t venture far from home when I drove, but Hubby was much bolder.

Not surprisingly, being “rich” Americans (and despite the fact there were no rules of the road), we got pulled over by the police more times in the two years that we lived in Indonesia than in all the years we lived in the US combined. This is because when the police pull you over, “you pay here,” meaning the policeman takes your payment for the traffic infraction right there. (You know where that money ends up.) If you insist on being issued a ticket, your license and registration are automatically confiscated and you may languish away for several days in traffic court before your case is called—after which you pay your fine. So, it is preferable to just go along with the bribe and get on with your life. We managed to get out of one fine by pretending we couldn’t understand what the policeman was saying. He finally became so frustrated, he just shooed us away. But most of them know enough English to say, “you pay here.”

Once, I was told if you create a scene when the police pull you over, you can sometimes get out of the fine, because the last thing they want is to be embarrassed in public. So, I put this advice to the test one evening when I was with my driver and a policeman pulled us over. As soon as my driver stopped our car, I hopped out and began a loud tirade in Indonesian. “Why did you pull us over? We didn’t do anything wrong. Are you just trying to get money from us? You want a bribe? You are corrupt!” The policeman exchanged astonished looks with my driver, his eyes beseeching my driver to “do something with this crazy woman.” My poor driver looked ready to crawl under the vehicle. Unfortunately, this incident occurred during Ramadan, and it was the time of breaking the daily fast, so the street was uncharacteristically deserted. There was no one to witness my scene. My ploy failed, but at least I tried, and I didn’t get arrested.

Interestingly enough, although the police were everywhere on the lookout for traffic infractions by foreigners in a country with no traffic rules, getting them to help when you needed protection was quite a different matter. We had an incident at our office one day where one of the teenaged street boys we ministered to came in armed with a machete, ready to attack anyone who got in his way. The police were called, but by the time they finally arrived (perhaps an hour later), Hubby had stepped in and disarmed the boy. (Yes, HUBBY!) Nevertheless, the police charged us for their services.

Now, although it still makes me nervous to have a police car following me, I don’t worry about automatically being pulled over and having to empty my purse. I just try to maintain the speed limit, stay in my lane, and hope he passes me. I count myself fortunate. 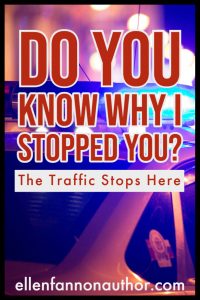