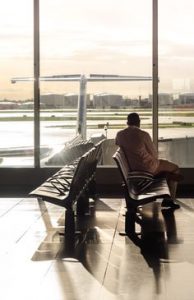 Pre-Covid and social distancing, did you ever find yourself sitting in a public area, like an airport, with plenty of seats available and someone sits down right next to you?   I don’t know about you, but this weirds me out.   I mean why is this person invading my personal bubble when there are plenty of other places to sit?   Are they trying to snatch my purse when I’m not looking?   Are they going to pipe up and start a conversation in which I will be forced to hear their entire life’s story whether I want to or not? Are they going to whip out their cell phone and show me pictures of their grandchildren who I don’t know or care anything about? Do they think I’m attractive and want to put the moves on me?   Call me unfriendly, but my mother taught me not to speak to strangers.

So, what do I do now?   Bury my nose in my book or my phone?   Act like I’m coughing up a lung so they’ll think I’m contagious and take the hint to move far away from me?   Pretend not to understand English if they start talking to me?   Make sure my purse is securely zipped and slip the strap over my head?   Get up and move somewhere else?   No, it would be too obvious to get up and move, and I don’t want to appear rude even if this person did breach my personal space.   So, I sit there, wondering about their motives and unable to concentrate on anything else I might be doing to pass the time, because they are making me nervous.   The only thing worse is if they are also drenched in overpowering body fragrance, reek of B.O., or yakking loudly on their cell phone.

It’s bad enough when my pets invade my personal space.   But at least with them, I can shove them away or even put them out of the room.   It would probably be considered confrontational if I shoved a stranger who sat next to me, and I could potentially incur injury, jail, or a lawsuit.

I suppose I could tell the interloper I’m saving the seat for someone else. But I would ultimately be revealed as a liar when my “someone else” failed to show up.   I could get up and pretend to walk away to make a call, get a drink, or go to the restroom, but eventually I will have to come back to the waiting area.   Then what do I do?   Pick another seat?   What if that person sees me sitting somewhere else?   I don’t want to hurt their feelings.   And why should I even care if this hurts their feelings? Well, for one thing, with my luck, I would probably end up sitting next to them on the airplane, and it might make the situation even more awkward.   Moreover, I’m just a nice person and don’t want to hurt anybody’s feelings, even rude strangers who make me feel uncomfortable.

Sometimes I wish I weren’t such a nice person.   Maybe that’s why strangers are drawn to sit next to me.   Maybe I’m sending out invisible “niceness” waves I’m not even aware of.   I don’t mean to!   But somehow, I just can’t bring myself to turn to the interloper and say, “Back off!   You’re in my space!”

The solution to preventing this is obvious.   I can spread my “stuff” everywhere around me in order to protect my “space.”   However, this brings me to another situation which really bugs me in a public waiting area, and that is people who take up more than their share of space by claiming all the seats around them with their stuff so nobody else can sit.   Sigh. I can’t win.   You might as well have a seat and join me. But please hold the pictures of the grandchildren. 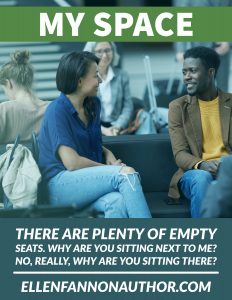