I’ll bet most of you have seen the old comedy, Planes, Trains, and Automobiles, starring Steve Martin and John Candy, in which two men are constantly sabotaged while desperately trying to get home from a trip. That’s how Hubby and I felt while trying to make it home from our doomed Alaskan vacation. But our situation wasn’t nearly as amusing as the movie.

After a glorious day and a half at sea, we both turned up positive for Covid and spent the rest of the cruise quarantined in a tiny cabin. We took the walk of shame as we were escorted from our nice room on the eighth floor to the dungeon on the fourth, while masked men walked behind us spraying disinfectant. I felt like a Biblical leper, feeling the need to call out, “Unclean! Unclean!” Thankfully, most healthy people and those who weren’t honest and reported their Covid symptoms were ashore, so there weren’t too many witnesses to our disgrace. We were placed into an elevator, where our escort punched the fourth-floor button, and stood back as the doors closed. There was no escape. Our escort materialized as we exited the elevator to continue marching us down an ominous hallway with a door blocking the entrance that said, “Authorized personnel only.” We were not issued keys for our new rooms, as we wouldn’t be leaving. Although the accommodations and room service were nicer, I now have a vague idea of how prisoners must feel.

For the next five days, our legs atrophied, as there was no room to walk. Then we were told that according to Canadian law, we would be quarantined an additional five days in a hotel in Vancouver, which is where the cruise ended. Quite by chance, Hubby was hanging over the railing of the balcony chatting with the inmate next door who told him that if we could arrange for a private car transport from Vancouver to Seattle (which is where we were supposed to fly out of), we wouldn’t have to stay in Canada. So, our poor travel agent was scrambling at the last minute to make that option work. We had to book a hotel in Seattle in order to show we had a place to go, even though we were flying out that night. Okay, whatever it took to get out of Canada.

The morning of debarkation, we were told that we would be escorted off the ship between 9:30 and 10:30. 11:00 came and went and we were still waiting, as literally everyone else got off the ship before we did. It felt like we had been abandoned and forgotten in an empty ship. Hubby kept peering out into the hallway to see if there was any sign of activity, and apparently a number of other inmates were doing the same thing. He said it looked like a game of “Whack-a-Mole.” One would have thought that at least all us contagious internees could have gotten together for some socialization during our time of confinement. But, then again, I didn’t much feel like socializing, especially with people who weren’t as sick as I was, which I found terribly unfair.

Finally, after an eternity, an officer knocked on our door and escorted all us undesirables off the ship and into a cordoned-off area of the terminal, where we collected our contaminated luggage. That was when I discovered my legs still worked. It was also when we finally got a look at our fellow hostages waiting to be extracted from the premises. I recognized a family that had sat with us at the dinner show in Denali, and I immediately blamed them for infecting us. Then again, maybe we infected them. But the husband, even though he was exhaling Covid virus into the atmosphere with every breath, still wore his mask around his chin like a chin diaper. It irritated me that no one in authority told him to pull it up. So, all things considered, I blame them. It makes me feel better. Particularly since I was so careful about wearing a mask everywhere and even carried Clorox wipes to disinfect every surface.

At last, we were free! Except we weren’t. A gestapo agent in a mini-skirt and cowboy boots blocked our exit, as she told us to “take a seat and wait.” So, we waited some more. And some more. Meanwhile, our driver had been waiting for over an hour and a half. I was afraid he would give up and leave. When I grumbled to “Miss Boots” that our driver had been waiting over an hour and a half, she informed me nobody could find our driver. So, my worse fears were becoming realized. We were not going to get out of Canada. But finally, the powers that be let our driver into the terminal and the next thing I knew, we were hustled to the car. Hallelujah! Now we just had to get across the border.

Being a holiday weekend, the line going across the border was long. I kept praying nobody would stop us and force us into another five days of quarantine against our will. We finally made it to the check point, where a border agent who looked and sounded Honduran (or Mexican, or Guatemalan – I’m trying not to be judgy here) asked us in a very snide voice what we were doing in Canada. I held my tongue from saying, “Trying our best to get the heck out.” Fortunately, Hubby had a cooler head and explained our cruise had ended in Vancouver and we were on our way to catch a flight out of Seattle. The agent let us pass and I breathed a sigh of relief to be back on U.S. soil where Covid quarantine is only five days, which we had completed. By the next morning we would be back in Florida. It was probably a good thing I didn’t know what lay ahead, as I might have flung myself from the moving car. 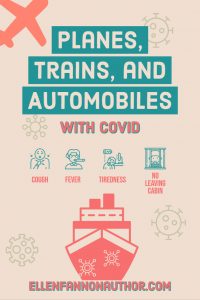