MY PATIENTS HAVE A LOT OF PATIENCE 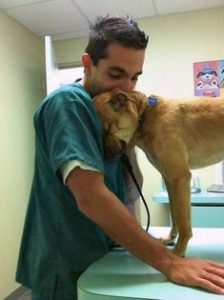 I had a doctor’s appointment a few days ago. Even though I knew why I was there and what was going to happen, I still couldn’t help but utter, “Ouch” when the needle pierced my skin. I’m not a good patient. I’m rather a wimp when it comes to personal pain and discomfort. It occurred to me, while I was gutting it out through my minor procedure, that if I were one of my own patients, I would not be a good one.

I would be one of those dogs who cowers in the corner, peeing all over myself, and snapping at anyone who threatened to remove me from my corner. That would be after I had to be dragged or carried to the exam room. I would be one of those cats who hisses and swats at anything in my path. I would be one of those birds who, given the slightest opportunity, flies all around the room, forcing the doctor and technician to chase me. They would have to move furniture out of the way to get to me, by which time I would take off for another area of the room where it was difficult to get to me. Once captured, I would attempt to sink my beak into the most sensitive part of the hand holding me.

That said, it is amazing how few of my patients are like this. Even though they don’t understand why they are having all these strange people doing unpleasant and scary things to them, most of them cooperate with good grace and a lot of them even manage to wag their tails, give our faces a lick, or beg for a scratch or two after everything is over. I wonder, sometimes, why animals are such good sports and so quick to forgive.

In addition, although they occasionally do stupid things, like sticking their tongues into paper shredders or ingesting non-edible substances, they do so out of ignorance, not to purposely cause problems for their owners. People, on the other hand, often do stupid things just to be stupid. I watch untold stories of the ER. I’m afraid I wouldn’t have much empathy for some of the patients these doctors have to deal with. I would probably just let the idiots die and take themselves out of the gene pool, which is perhaps why I am not a people doctor. Unlike the young Labrador who suffers a snakebite due to his natural curiosity, many of the incidents of humans who incur snakebites were preceded with the words, “Here, hold my beer. Watch this!” Give me the Labrador over the stupid drunk any day. At least the dog will reward me with love. The drunk—well, let’s just say I can do without his love. 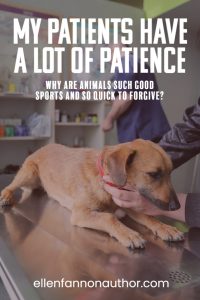