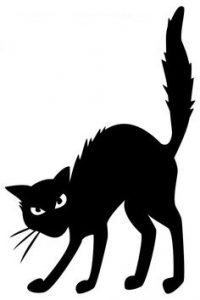 Friday at work, an owner brought in two black kittens, identical littermates. Not that it unusual to see black cats in my practice, as black is a relatively common color for cats. But since tomorrow is Halloween, and black cats have traditionally gotten the unfortunate reputation for being associated with bad luck, I had to do a little research to find out why.

In ancient Egypt, as far back as 3000 B.C., cats were considered sacred. But around the time of the Middle Ages, cats became associated with witchcraft and devil worship. By the 1500’s, it was believed that witches could shape-shift themselves into the form of black cats (which are difficult to see at night) and roam freely to cause misfortune and spy on people. The first American settlers brought this belief across the Atlantic, and this superstition was firmly entrenched at the time of the Salem witch hunts. Sixteenth-century Italians believed that if a black cat jumped on the bed of a sick person, the person would soon die. In Colonial America, Scottish immigrants believed that a black cat entering a wake was bad luck, and indicated the death of a family member.

Not all cultures associated black cats with bad luck, however. For example, according to Appalachian folklore, if you had a sty on the eyelid, rubbing the tail of a black cat on it would make the sty go away. (I can’t imagine how this superstition got started. Who would ever think of such a thing? Besides, wouldn’t having cat hair in an already painful eye make things worse?) In the UK, black cats were thought to bless marriages. English superstition says that giving a bride a black cat on her wedding day will bring her good luck in her marriage. (Yeah, everyone needs a cat for a wedding present.) Black cats were also thought to ward off evil spirits and give English sailors safe travel. This idea was so firmly believed that black cats were often too expensive for most sailors to afford. In Scotland, a strange black cat on the front porch is supposed to bring good luck. Japanese folklore says a black cat will bring many suitors to a single woman. They also bring wealth and prosperity in Japan. The Norse goddess, Freya—goddess of love, fertility, and beauty—rides on a chariot pulled by two black cats. (Those must be some strong cats!) Farmers left bowls of milk for the cats in order to be blessed with a good harvest. The French believed that if a black cat was released at a crossroads where five roads intersect, the black cat would lead them to treasure.

Black cats are certainly associated with more than their fair share of bizarre beliefs. Now let’s look at some of the more logical reasons to own a black cat. 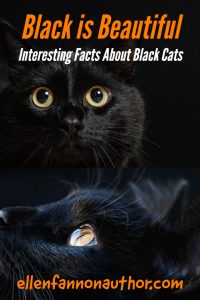