I have come to the conclusion that there are two types of people in the world—those who have a good sense of direction and the rest of us. Which is why I should never navigate or give other people directions. People think I’m exaggerating when I say I can get lost going in my front door and out my back door, but it’s the truth. I can get lost going to places I’ve been to a thousand times. Those who have been unfortunate enough to ride with me are fully aware of my inability to arrive at a destination without at least one wrong turn.

It’s not as if I enjoy my handicap of being directionally challenged. So I did a little internet search to try to figure out why I have such a hard time simply getting from one place to another. It turns out, according to research, there is an area of the brain called the entorhinal cortex which, among other functions, helps in navigation. I apparently have few working neurons in this region. Therefore, I can’t help it. I am brain damaged. As if that isn’t bad enough, there also appear to be gender differences between men and women, with men having a better sense of direction. If that isn’t sexist, I don’t know what is. Surely there must be some way I can be compensated for the unfairness of this gender inequality.

This lack of navigation skill did not work well in my previous marriage in which I was relegated to read the map whenever we traveled. (Yes, this was WAY before GPS when we actually had those paper fold-up maps that never refolded properly.) Inevitably we ended up lost and fighting.

Fortunately, my dear hubby of thirty-one years came equipped with a perfect sense of direction and navigation skills. This is both a blessing and a curse. I can rest assured Hubby will get us to where we need to go, and it relieves me of the pressure of knowing that, once again, if left up to me, I will fail to direct us to our destination. Before GPS, Hubby insisted on reading the map himself, usually as we cruised down the interstate at seventy miles an hour. Now, with the advent of modern technology, he can follow our progress on his iPad, which he also does as we cruise down the interstate at seventy miles an hour. He still doesn’t trust Siri to get him where he needs to go.

It doesn’t matter whether he is driving or not. He always has to follow our route as we travel. To me, one of the biggest advantages to taking a tour or flying is to let someone else figure out how to get to where we’re going, like the bus driver or the pilot. I can sit back, relax, and not have to worry about getting lost. Not Hubby. He must know at all times exactly where we are. Even though I tell him, “We’re right here,” it’s not good enough. He is the one who has to monitor the progress of the airplane through the entire flight. When we took the train to Denali (prior to catching Covid), he didn’t see a bit of the scenery as he was so busy tracking the trip on his iPad. (Like the rails the train was traveling on would get us lost.) It wouldn’t even be so bad if he would just keep the enjoyment of his obsession to himself. But he periodically has to point out to me where we are, even if it involves waking me up from a sound sleep. It doesn’t matter how many times I tell him I don’t really care. He can’t help himself.

Years ago, we took a tour of Europe. At each stop, his first order of business was to find a place to buy a map. This quest was not always as simple as it sounded. Sometimes it took a while to locate such an establishment. Then, he couldn’t just buy any old map. He had to compare all the various options to find the exact one he wanted. I can’t tell you the number of sights we missed because of his obsession to procure a map so he would know where we were.

After thirty-one years, I have learned to live with this quirk of his. Besides, it’s not as if I can tell him to “get lost.” 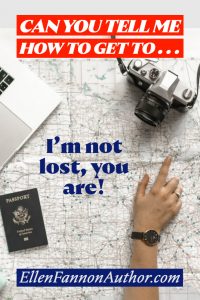