I hope everyone had a happy Thanksgiving. You are now officially permitted to begin celebrating the Christmas season. Yes, I realize that some of you cheated and jumped ahead, putting up your tree before Halloween, but allow me to say that this is just plain wrong. The turkey is due his day.  And the turkey leftovers are due their week following Thanksgiving.

At my house, I did pretty much what I have done for Thanksgiving over the past forty-five years—spent it in the kitchen, like my mother did. Somewhere along the line, the guilt gene was passed down to me that unless I spent Thanksgiving (and the day before) slaving away in a hot kitchen, my family would be deprived of a holiday tradition that would go on to scar them somewhere down the road, leaving them emotionally stunted and possibly causing a psychotic breakdown. Not being able to live with the consequences that going out to eat might entail, I perform the yearly ritual with as much grace as I can muster.

But I have to admit that unlike my mother, who made everything from scratch, I fudge a little. As a new bride, I asked Mom how to make dressing. Mom always made homemade dressing by setting out pieces of bread to harden several days before Thanksgiving. Then she ground them up into bread crumbs and mixed them with various seasonings before packing them into the turkey. On Thanksgiving morning, the delicious aroma of onions and celery cooking in butter, which would later be added to the dressing, filled the entire house. So, the first year, I dutifully followed her directions and made homemade dressing. I had no idea there was any other way to make dressing. Imagine my surprise when I discovered that Pepperidge Farm had ready-made, already seasoned bread crumbs or cubes that I simply had to add chicken broth and butter to. I also didn’t realize there was any other way to cook dressing other than inside the turkey. For years, I crammed dressing into the bird’s cavity (I guess that’s when it officially becomes stuffing) because that’s how Mom always did it, so it had to be the right way. The year we deep-fried the turkey, I finally succumbed to cooking the dressing in the oven, by itself, although I knew it wouldn’t taste nearly as good. Somehow, it tasted fine.

Mom also cracked and picked out every nut she used in any recipe. She spent hours digging out walnuts, pecans, and almonds. I still feel a twinge of guilt when I buy already chopped nuts. Mom made all her pies from scratch, including making and rolling out the crust. I can count on one hand (one finger, actually) the number of times I have made homemade pie crust. We were living in Indonesia at the time, where there weren’t readily-available pie crusts in the stores. But here in the good ole’ USA, beautiful Pillsbury pie crusts are obtainable for a reasonable price. I’m sure Mom would be outraged at the money I waste on chopped nuts and ready-made pie crusts. Well, probably not pie crusts, because I rarely buy those. Instead, I have discovered that Sara Lee makes excellent pies that probably taste better than whatever I would attempt to make from scratch. Some don’t even require baking. You just let them thaw at room temperature. It doesn’t get any easier than that. (Except for having to justify in my mind to my mother, who has been gone for thirty-nine years, why I wasted five dollars on a pie.)

For a long time, I made homemade gravy from the turkey drippings, just like Mom. Then I graduated to gravy packets, and finally to the delicious gravy that comes in a jar. I do cringe a little when we throw out the turkey drippings, as well as the turkey neck and giblets, but what am I going to save them for? Mom always cooked the neck and the giblets for the dogs. My poor dogs get dog food on Thanksgiving, just like every other day. I ashamedly admit that I never basted my turkey, like Mom, either. I just never understood how pouring juice over the skin that was going to be cut off anyway did anything to make the turkey moist. (The internet backs me up on this.) I did, however, used to bring home a big syringe and needle and inject melted butter right into the meat while it roasted.

I still make homemade mashed potatoes because instant mashed potatoes are yukky. Mom taught me that. And I buy brown-and-serve rolls because even Mom didn’t make her own bread. But unless we have company, there is no way I’m digging out the fine china and silver, like Mom did. I’m not about to hand wash the china before and after dinner, and polish silver. I don’t care if we eat off correlware and my silverware doesn’t match.

So, there you have it. I feel much better getting these things off my chest. I only wish I could pass the guilt gene to my kids. But, unfortunately, they’re adopted. 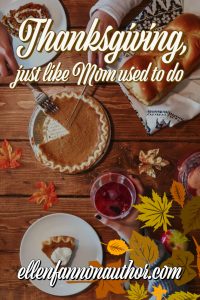