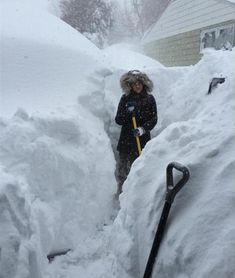 There is a song played around this time of year called “Let It Snow.” I remember hearing this song from the time I was a child, and it is still popular today. It was written during a heat wave in Hollywood, California, by lyricist Sammy Cahn and composer Jule Styne in July 1945 (so yes, this song was out for several years before I was born). Although not initially written as a Christmas song, the topic of winter weather propelled it into the Christmas season, along with a number of other songs not originally associated with Christmas. It has been recorded by a number of artists, including Frank Sinatra, Dean Martin, Bing Crosby, Carley Simon, and Rod Stewart. It is played and sung in countries around the world.

I’m sure you’re familiar with the lyrics, which on first glance, sound rather romantic. However, having lived in the northern climate with its miserable winter weather, I have to take exception to some of the sentiments. Just because the people in the song don’t have any place to go and hence don’t care if a blizzard is coming down around them, perhaps that same thought doesn’t pertain to those who are stuck out in the cold. I vividly remember having to be outside in the bitter cold, particularly during my senior year of veterinary school when I had all my large animal rotations. I shamefully admit that when I was standing out in the freezing wind and snow, I didn’t have much compassion for the sick farm animals we were called out to treat. All I wanted was to get back in the warm truck and thaw out my frozen fingers and toes, and leave the beasts to their own devices.

Driving in the white stuff was also not pleasant. There were times it took several hours to drive a few miles due to the horrible road conditions. That is, when it was possible to even get the car out of the parking lot. More than once I got stuck in the snow somewhere and had to depend on the kindness of strangers to push my car out. There is no more helpless feeling than to be stranded with your wheels literally spinning and going nowhere. Then there was the time I hit a patch of black ice on I-71 going seventy miles an hour and did a complete 180 on the freeway. Fortunately, traffic was light that day and I escaped a potentially fatal situation.

So, forgive me when I hear the lyrics, “Since we’ve no place to go, let it snow, let it snow, let it snow,” and I want to scream, “No! DON’T LET IT SNOW! This is not why I moved to Florida!” Moreover, I have to resist the urge to wrap my hands around the necks of people who proclaim, “Isn’t the snow pretty?” Sure, if you have no place to go and are sitting by the fireplace sipping hot chocolate watching the snow out the window. If you’re out shoveling the stuff off your driveway so you can get your car out to go to work, snow loses its attraction real fast. Not to mention having to scrape ice off the windshield. Doubling the time it takes to drive somewhere also becomes tiresome. And when you’re slipping on hidden patches of ice and praying you don’t break anything important in the fall, the white sand of the beach looks better and better. I happily left my snow shovel and ice scraper behind when I moved to Florida. Then there are the odd ducks who live in Florida and say, “I miss the snow.” Really? Then go back up north. I hear Buffalo, New York, had a storm that dropped a record amount of snow in a twenty-four-hour period, leaving anywhere from fifty to seventy inches. As for me, if I want to see snow, I’ll watch the nature channel or a Hallmark Christmas movie, where it is always snowy, but somehow the characters are never cold.

I do have to give kudos to the singer of “Let It Snow,” however, as he finally left the warmth of the fire, going out in the weather to go home. At least he had some moral fiber and didn’t use the weather as an excuse to spend the night with his sweetie. But I wonder if his tune changed from “let it snow,” to “what was I thinking?” once he had to shovel his way out of the driveway. 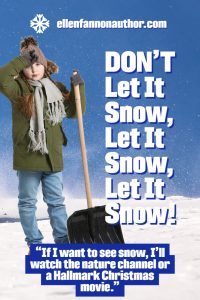