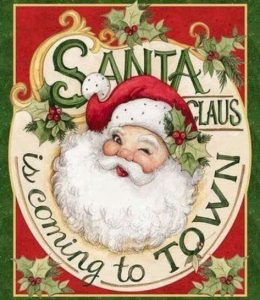 You better watch out. Santa Claus is coming to town. He knows all about you. He sees you when you’re sleeping. He knows when you’re awake. He knows when you’ve been bad or good. Somehow, this sounds a little creepy. Like a stalker. He even keeps a list and checks it twice to find out if you’ve been naughty or nice. Not only that, but he breaks and enters your home while you are asleep by climbing down your chimney, and he eats your cookies.

I suppose he can get away with activities that would be considered disturbing or possibly even illegal because he gives you presents. Plus, he is a jolly old elf who runs around saying, “Ho, ho, ho.” But from watching the reaction of some of the children forced to sit on the lap of a red-suited, strange old man with a beard, I think some of them would just as soon he leaves the toys and keeps his distance. I just received a Christmas card from a friend who sent a picture of her two children on Santa’s lap, and they did not look happy.

Still, the magic of believing in Santa is a precious tradition for many children, as well as a not-so-subtle way for parents to keep children on their best behavior during the few weeks before Christmas. As far as I know, my two sons, ages twenty-eight and sixteen, still believe in Santa, as I told them when they stopped believing, they would get underwear for Christmas. Alas, I was only five years old when I figured the whole Santa business couldn’t possibly be for real, and I suffered as the only unbelieving child in my kindergarten class. Not only that, but I never bought off on the Easter Bunny or the Tooth Fairy, either.  So, I had a deprived childhood.

Here are some fun facts about Santa that you might not know:

Hope these trivial facts gave you a Ho Ho Ho! 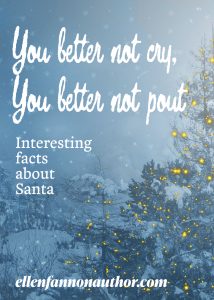