We just returned from a week’s vacation in Utah, visiting a number of national and state parks, which was wonderful.  Getting to and from Utah, however, was not so wonderful. Well, I suppose I shouldn’t go that far. The planes were on time, and after discovering that United Airlines had cancelled the first leg of our trip without notifying us, we were able to re-book our flight with American Airlines. We even had snack service, such as it was—a paper bag with a bottle of water and two cookies for a four-and-a-half-hour flight—although it was difficult shoving the cookies under our masks, that were required throughout the flight. Not that anyone in authority enforced the proper use of masks, however, as I stared in utter disbelief at all the bare nostrils and lips sticking out above the masks.

I had to shake my head at the incongruity of the airlines attempts to keep people healthy. Masks were mandatory (which I am totally fine with), but as long as the mask hung somewhere in the vicinity of our faces, it apparently counted. We were told to socially distance as we lined up to board the plane, where, once aboard, we were crammed into seats within two inches of germ-infested strangers. No empty seats or rows to ensure our health safety. Not with the almighty dollar at stake. When we deplaned, we were told to stay seated rather than stand in the aisles, and deplane row by row—because, of course, it’s harder to catch Covid-19 seated two inches from a germ-infested stranger than it is to stand next to one in the aisle. I’m sure I endured my share of impatient glares as I refused to allow my family to be seated until I thoroughly wiped down each seat, seat belt, tray table, armrest, and window shade with a disinfecting wipe. The one thing I couldn’t wipe down was the germ-infested airline magazine, which, for reasons I couldn’t fathom, still resided in the seat pockets in front of us. I shrieked at my clueless husband and son for touching them.

But as strange as our lives have become in the past few months, the one strange thing that hasn’t changed since 911 is airport security.  Now I’m all for not allowing terrorists to carry weapons aboard airplanes, but I have never understood how a 3-ounce bottle of shampoo is safe, but a 4-ounce bottle is not. Security is a nightmare all by itself. Once passengers have deposited their carry-on luggage (after removing liquids less than 3 ounces), cell phones, lap tops, purses, wallets, keys, change, belt buckles, diaper bags, and unruly children  onto the scanning belt, and undressed to the point of indecent exposure, there are a few terrifying moments in which our stuff is on one side of security and we are on the other. And may I point out there is nobody standing guard over our stuff, leaving it wide open for anyone to come along and snatch it up while we are helplessly backed up behind the body scan. Plus it’s hard to chase down thieves when you are in your stocking feet and have no belt to hold your pants up.  My poor husband inadvertently mooned several people when he was forced to raise his hands in the body scan while his belt to hold his pants up sat in a tray on the other side of the security gate.

Finally, on the other side of the security gate, it becomes a challenge to ensure you have gathered up all the belongings you were forcibly separated from.  You have to redress yourself, repack your carry on bag, replace your laptop into its bag, make sure all the contents of your purse haven’t spilled out on its ride through the scanner, gather up your wallet, phone, keys, change, and unruly children, and attempt to do so while trying to get out of the way of everyone behind you.  Invariably, something is lost or forgotten in the manic scramble.

Nevertheless, we managed to make it through the aggravation of air travel and to and from our destinations. Just don’t get me started on the fun-filled adventures at the rental car terminal. 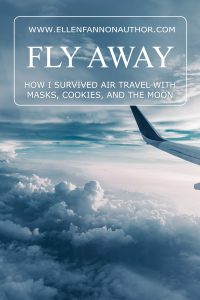