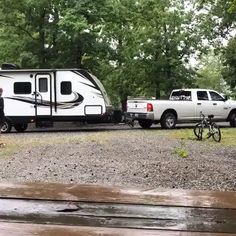 My husband and I were bit by the camping bug and recently took the plunge by spending our children’s inheritance on a 22’ Jayco camper. This is something we have always talked about “someday” doing, and thought, “What the heck, let’s start retirement early.” Even though it will be a few years before we can actually do much camping, we figured we might as well spend our money before the government spends our money for us.

Of course the initial investment in the camper, itself, is peanuts, compared to all the required “extras,” to the tune of another several thousand dollars. Then my husband and I were invited to an RV resort (think timeshare), in which we were offered 25 free nights of camping without obligation, simply for listening to an hour-and-a-half sales pitch for a camping membership. Before we went, we promised each other we were not going to buy anything. (That’s how we ended up with our time-share condo twenty years ago.) We re-confirmed that decision just prior to the presentation and half-way through the presentation. At the end we wound up with a lifetime membership—but hey, the guy was a good salesman. Now, another several thousand dollars later, we have all this free camping we have to use, so we took three days before Thanksgiving and spent them at our home resort on the Styx River.

The resort was nice, and one good thing is that there were other teenagers, so Darion wasn’t “bored” like he was when we camped in the Blackwater State Forest. In fact, we rarely saw him, which is another good thing. But looking at some of the other campers (or should I say “motor mansions”) my idea of camping was completely revised. See, my idea of camping stems back many years ago when camping involved tents, sleeping bags, and hiking to the flush toilets. I thought we had truly come up in the world with our little trailer that features a queen-sized bed, bunk beds, a small refrigerator, two-burner gas stove, microwave, and indoor bathroom. Yes, we trip over each other in the small confines of our camper, but isn’t that part of the fun of camping? But I was blown away by some (most) of the other trailers that are bigger than my whole house. These monsters have 2 and 3 bedrooms, 2 and 3 baths, pop-outs, full living room/dining rooms, full kitchens, outside built in grills and large screen TV’s inside and out. Correct me if I’m wrong, but isn’t part of the idea of camping to simplify and leave all those things behind? Especially the TV. If I could leave the Wifi and cell phone service, I’d be all over that, too. There’re probably even servants’ quarters tucked away somewhere in those behemoths.

I looked at our pitiful little trailer by comparison and was almost waiting for the resort to ask us to leave, as we were bringing down the property value. I felt like the poor relation in the slum. In fact, up until the last day, I believe ours was the smallest, plainest little camper in the whole RV park. The good news is that for the first two nights, we didn’t have anyone camping on either side of us. Maybe they didn’t want to get too close to the riff-raff. Then a family with four kids pulled in two sites away from us with a little pop-up camper that actually made ours look good.

The other thing I’ve rediscovered about camping is that is takes a lot of time, planning, and effort in order to have everything we need to “relax” and do nothing. Then when we get home, it takes a lot of time and effort to unload, clean up, and restock. Now that we’re back, I need another vacation to rest up. 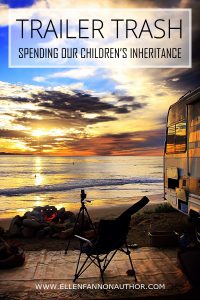