Ugly is in the Eye of the Beholder 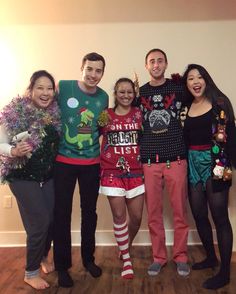 Thanksgiving is over and I can now, officially, get into the Christmas season. (Unlike other people who cheat and put up their Christmas tree on Halloween. But that’s fodder for another blog.) This means, among other things, I can dig out all my Christmas clothes that I wear once a year. Once upon a time, it was trendy to wear Christmas clothing. So each year, usually after Christmas (when the sales went into effect), I bought a few items, which has gradually grown into a large collection of seasonal garments.

Frankly, I think this whole “ugly Christmas sweater” movement is somewhat disrespectful. I watch movies or TV shows in which the characters try to sport the ugliest Christmas sweaters in order to poke fun at each other’s attire, and I think, What’s wrong with that sweater? I kind of like it. And people are actually having “ugly sweater” parties and “ugly sweater” contests. Granted, I’m not exactly a fashionista, but when it comes to Christmas sweaters, it seems like making them the butt of jokes is just plain wrong. I mean, really, is nothing sacred?

I will probably continue to wear my outdated and ugly Christmas outfits until I die. But at my age, I can get away with being tacky without people judging me. On the other hand, maybe people are judging me, but again, at my age, I don’t care. It makes me happy, and I’m allowed to be eccentric. Now my only problem is deciding whether to wear the sweater with the snowmen or the reindeer first and hoping it stays cool enough to wear both during the next few weeks. Because despite everything I have just said, perspiring in an ugly Christmas sweater when it’s 80 degrees outside doesn’t make me feel particularly jolly. 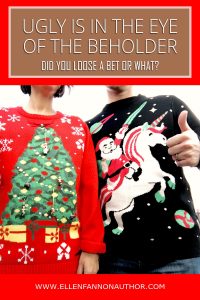