That’s the Way the Water Falls

At the bottom of Tallulah Gorge. (Note how thrilled Younger Son is.)

As I mentioned in last week’s blog, my husband, teenaged son, and I spent a week camping in northern Georgia over spring break. One of the things we like to do while on vacation is to see things that we can’t see at home, like waterfalls. Yes, Northwest Florida does have Falling Waters State Park, but the falling water depends on whether or not it has rained recently, and then, if you’re very fortunate, you may see a trickle, rather than an actual fall. In contrast, northern Georgia has an abundance of spectacular waterfalls, some more accessible than others. But making an effort to get to the falls is all part of the vacation experience, right? I mean, if we could simply walk 100 feet from the parking lot to the falls, we wouldn’t have the same appreciation for the wonder of God’s creation, right? Well, ask me again on the fourth day of waterfall hiking.

The first waterfall we visited was Anna Ruby Falls, close to where we were camping. The waterfall is accessible via a half-mile paved trail. Did I mention the trail was straight up? Nevertheless, once you have huffed and puffed your way to the top, you are treated to a beautiful view of the twin waterfalls cascading from the cliff above and spilling over the boulders below. Your reward for making it to the top, other than the stunning scenery, is that returning to the visitor center is all downhill. Which makes a lot of sense, unlike the rest of the waterfalls we visited.

Our next excursion was to Tallulah Gorge, a 1,000 feet deep canyon, where you can take a two-mile hike down to a suspension bridge 80 feet above the gorge floor. To get to the suspension bridge, you have to descend 310 steps after a fair downward trek on the trail along the rim of the canyon. There is a sign at the top of the trail warning visitors that this is a strenuous hike. I blew it off. No problem. It’s not like I’m one of those fragile old people who’s out of shape. Going down was easy, but I grossly underestimated the impact of having to hike back UP 310 steps. Oh, and once we were on the other side of the suspension bridge, we were teased with another 221 steps leading down to the waterfall below. Well, shoot, after coming all this way, who could resist? What’s another mere 221 steps? Especially when going down. The falls, again, were beautiful, but at some point, we realized we couldn’t just stay down there all day, and had to start the rigorous climb up. At the first landing after going up, perhaps, twenty steps, I voiced the thought, “Maybe this wasn’t such a good idea after all,” as I looked up and saw nothing but endless steps leading to what appeared to be a mile above my head to the top.

Younger Son took delight in tormenting his elderly parents over our propensity to stop and gasp for breath after every few steps. We passed off our oxygen-deprivation as needing to stop and capture the splendor of the scenery with our cameras, rather than suck in huge lung-fulls of air to keep from dying. But we weren’t fooling anyone, especially ourselves. At long last, after I could no longer feel my legs, we made it to the top, where we had to hike another half-mile or so back to the visitor’s center on the other side of the canyon. When we finally came out of the woods leading to the parking lot, I was dismayed to find that we had to go up another several steps to get to the parking lot.

“No fair!” I protested. “These steps were not included in the total count!” That, in my opinion, was false advertising on the part of the park. It’s bad enough to have to navigate 1062 steps without being told there will be an additional eight steps leading back to the parking lot.

We finally made it back to the truck and back to the campground, where I collapsed and rewarded myself with chocolate, trying not to think about how the muscles in my legs were going to complain the next day. But we got lots of great pictures, which I will be more than happy to share with you. There are too many to post on Facebook, but remind me next time you see me and I will treat you to all 3498 photos! 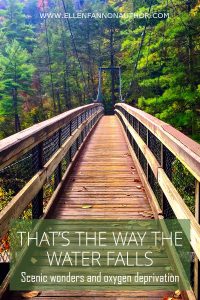