Yet Another Camping Blog 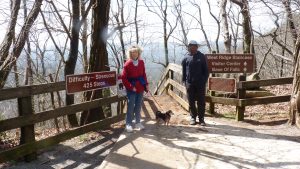 You may be getting tired of the adventures from our Georgia camping trip. If so, I will happily regale you with stories of the grandchildren. (No, not really.) Due to the nonstop freezing rain, we had a break from hiking the day after our 1062+ steps in and out of Tallulah Gorge. So, we took advantage of not having to prove anything with our athletic prowess by going into Helen to do some shopping. It was then that I realized my tennis shoes were not waterproof. I also realized my raincoat did very little to protect my bottom half, as my jeans were thoroughly soaked, as well. The relentless cold rain even managed to dribble into my sleeves. The generally delightful little alpine town seemed less delightful in the dreary downpour, so after about an hour of dripping all over the retailers’ merchandise and listening to our teeth chatter, we gave up and headed back to camp, where Younger Son spent the day in the lodge in front of the TV and I bundled up with my blanket and a book.

The next day, the rain let up enough for us to continue our hiking. We started out at Raven Falls, then discovered the 2.5-mile one-way hike was maybe a little more ambitious than we were prepared for, and settled for Duke Creek Falls, a mere 1.1-mile hike winding progressively downward through the woods to the bottom of the falls. After trekking through the woods for what seemed like forever and thinking this was the longest mile I had ever hiked, we finally made it to the bottom, where I told myself the spectacular scenery was worth the climb down—but not necessarily the climb back up. 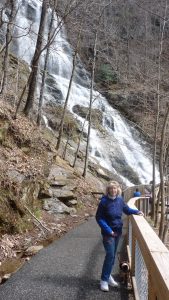 Nice, level, paved path to the bottom of the falls.

Last on our list was Amicalola Falls, where we started at the top and walked down a mere 425 steps along the side of the falls. The sign at the top warned that it was a strenuous undertaking, and after nearly dying at Tallulah Gorge, I was more inclined to believe it. Imagine my displeasure when I discovered that at the bottom of the steps, there was another parking lot a mere several hundred feet off to the side with a nice paved, level walkway, leading to exactly the spot where we stood WITHOUT HAVING TO GO DOWN AND WORSE, YET, BACK UP 175 STEPS!  After thoroughly berating my husband, the poor man was ready to climb back up and bring the truck around. I almost let him. Still, the falls were stunning, and being able to follow them on foot from top to bottom was rewarding, even if it did involve a little extra effort. But that’s all I’m willing to concede.

So now we’ve done our exercising for the year. And camped in the cold and the rain. I’m somewhat inclined to agree with Younger Son and wonder if we are ever going to go on a real vacation again. I’m in dire need of a hot tub. 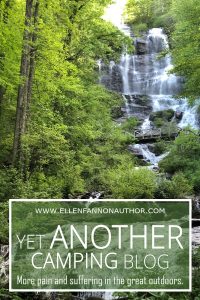