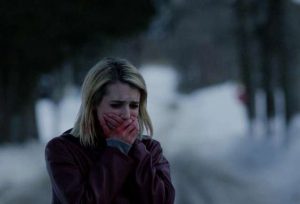 I was watching yet another suspense movie the other night that opened with a man working alone in his house late at night when suddenly he hears a strange noise. So what does he do? He gets up and walks through the house, calling, “Hello? Is someone there?” As if the axe murderer will cheerfully reply, “Don’t worry. It’s only me, the axe murderer. Didn’t mean to startle you.” Oh, and of course, the doors and windows have been left wide open. Doesn’t anyone ever lock their doors and windows in horror movies?

I don’t know about you, but if I’m alone in the house, and nobody else is supposed to be there, and I hear a strange noise, the last thing I do is announce where I’m at as I stomp through the house looking for killers.  This got me to thinking of all the other stupid things people in scary movies do. Like running down the middle of the street when a car is chasing them, hoping to outrun the car, rather than running out of the street into the woods, a building,  or anywhere else a car can’t go—preferably a highly populated area. Or hanging out in dark, isolated places when they know someone is after them.

Here’s another common scenario in scary movies: If in a group, everyone splits up so each person can look for the killer all by himself. Everybody knows the chances of surviving are much better if a person is separated from the crowd, where the killer can pick his victims off one by one. And if there is a scary building in the movie, it makes perfect sense to run into it rather than away from it. Or if the character is inside the scary building when something happens, rather than getting out and calling the police from a cell phone, he investigates all the strange noises coming from the most remote areas of the house, like the basement or attic, where he has the highest likelihood of getting trapped. Those who manage to escape often do so with so much noise it leads the killer right to them. Or if they find great places to hide, like under the bed, behind a door, or in the closet, they sob loudly or breathe like they’ve just run a marathon and hope the killer doesn’t hear them.

Sometimes, someone has the wherewithal to escape and make it to their car; but why do they never think to check out the back seat before actually getting in and driving away? Speaking of cars, why don’t people get a grip on those keys? How many people fumble and drop their keys at a critical moment that makes the difference between life and death?

And why are people in horror movies always so clumsy? I understand panic can make people do dumb things, but for crying out loud, look where you’re going so you don’t trip and fall or run into a tree. Once down, they’re never able to get up again(regardless of whether anything is broken or sprained), and try to escape by crawling—as if that’s going to work. Another scenario that drives me crazy is when the killer attacks the boyfriend and the girl just stands there and screams instead of looking for a big rock with which to bash the killer’s head in, or jumping on his back and clawing at his eyes. Or if someone does manage to take down the killer, why do they have to stop to verify the killer is, in fact, dead, instead of getting the heck out of there? And why do people continue to live in haunted houses, particularly after a series of bad events has already occurred?

To me, the fact that people in suspense movies are so stupid is, in itself, just plain scary. Sometimes I think people who behave so foolishly deserve their fate. At least it will take them out of the gene pool. It makes me want to jump into bed and pull the covers up over my head. 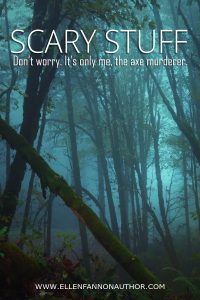